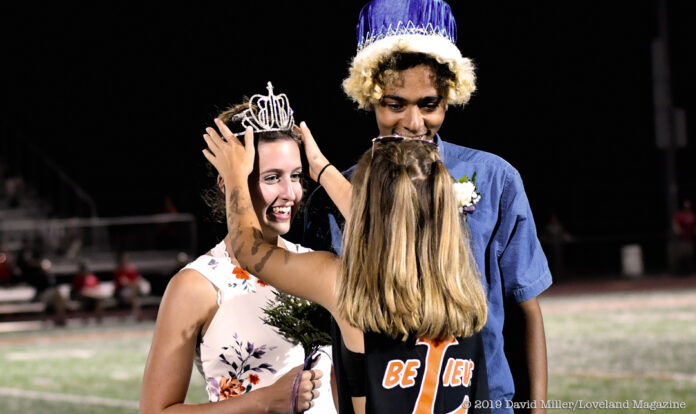 Loveland, Ohio – Homecoming weekend has come and gone, and students are resting and reminiscing from the constant adrenaline that the week brought.

To start off the festivities on Thursday, September 26, the Loveland Athletic Boosters hosted their annual Homecoming Parade. Homecoming floats graced the streets of Loveland with our very own tiger athletes, robotics team, cheerleaders, and the homecoming court nominees.

Here is our time-lapse video of the Homecoming Parade

Here is our slide show of the Homecoming Parade

Later Thursday night at the high school, students faced off in powder puff football and volleyball, as well as the winner of the cutest dog contest, was announced.

On Friday night, as our school faced off against Milford, students packed the stands in anticipation of not only a sudden change in score, but of the festivities around them. The Loveland Show Choir performed in a semi-circle in front of the parents, the national anthem was sung, and fireworks went off, scaring the unsuspecting spectators. The home team took one on its Tiger chin losing 13-42, but that didn’t take away our Tiger spirit.

Also, before the game, baby powder was distributed among the students and as the game started, clouds of orange and white covered the entire senior section. No person was left unmarked from the powder as many wondered if the nominees for king and queen were caught in the clouds. Not to worry, because at halftime, seniors Jeffrey Scott and Molly Hansen were crowned Loveland’s Homecoming King and Queen.

Later on, Loveland’s marching band performed a cover of New York by Alicia Keys and Jay-Z, while displaying stands of New York imagery. The Colorguard wore matching outfits to the theme, showcasing grey suspenders and yellow taxi cab-like ties to allude to the New York aesthetic.

Starting off Saturday night, girls and boys dressed up in elegant attire can be seen standing in a long line, waiting to enter the homecoming dance. As principal Peggy Johnson tweeted of the arrivals, the anticipation to finally enter the gymnasium escalated, as she captioned a video of the crowd dancing, “Yes this is a sea of dancing tigers!”

Yes this is a sea of dancing Tigers! #LHSHOCO2019 pic.twitter.com/PfbduONBlS

By the end of the night, the homecoming king and queen had their special dance while the music and lights continued to electrify the crowd all the way up until the mountain of discarded high heels began to suddenly decrease.

In the end, students came out satisfied with their homecoming weekend activities as they had the Sunday to rest before another week of…mandatory school activities.

Here is a slide show of more of the Homecoming Game game fun!