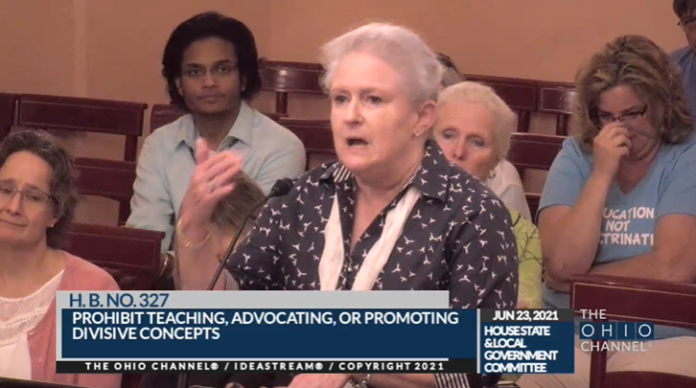 Dr. Jenny Shafer Kilgore, a member of the state Board of Education, speaks in support of a bill to eliminate the teaching of “divisive concepts” in schools. Kilgore lost her race for re-election in Tuesday’s general election. Photo from The Ohio Channel

Two incumbents on the Ohio State Board of Education were not reelected in Tuesday’s general election.

One unseated member was part of a movement on the board to rescind an anti-racism resolution that mired the state board in controversy, and the other was a governor-appointed member before he sought election to the board.

Of the 19 members of the board, 11 are elected and the rest are appointed by the governor.

The school board races were also different this year because of a district shuffle caused by statewide redistricting. Though the changes were spurred by changes in the statehouse and congressional voting districts, decisions on what the school board districts looked like were approved solely by the governor.

Incumbent Dr. Jenny Kilgore, an elected board member since 2019, lost her bid for reelection, with challenger Katie Hofmann edging past her in a margin just north of 30,000 votes.

Kilgore was a vocal opponent of an anti-racism resolution passed following the death of George Floyd and social unrest in the country regarding racial issues, though she abstained from the initial vote on the measure. A movement then began to rescind the resolution as conservative outcry for so-called “critical race theory” and “indoctrination” came to a head in Ohio. The resolution was also rescinded amid efforts in the Ohio legislature to put up “divisive concept” bills that would ban discussions of the impact of race on history if it was determined to create “guilt” among white students.

District 4 board member Kilgore also participated in public protests against “critical race theory” in schools, and testified before a legislative committee, saying House Bill 327 “would allow teachers to teach the subject without the distractions of critical race theory… they would have more opportunity to focus on the subject matter.”

Fellow incumbent Tim Miller lost his bid to join the board as an elected member to challenger Tom Jackson. Jackson received 44% of the vote in unofficial results from Tuesday. Miller was more than 50,000 votes behind Jackson, also narrowly falling behind a third challenger, Cierra Lynch Shehorn, by just under 600 votes.

Miller was appointed by Gov. Mike DeWine in 2021 to fill Sarah Fowler Arthur’s District 10 seat left vacant when she joined the Ohio House.

The outgoing member was instrumental in sending a resolution condemning the Biden administration for changes to anti-discrimination regulations that would include gender identity if accepted on the federal level to executive committee, rather than a full board of ed vote.

Also elected on Tuesday was former state senator and Toledo-area educator Teresa Fedor, who defeated opponent Sarah McGervey with 56% of the unofficial vote totals in the District 2 race.

Hofmann said the elections that happened on Tuesday show the need for a different tack on the board of ed.

“The election of Theresa Fedor, Tom Jackson and (Hofmann) is a clear message that people in Ohio want high quality public schools, not more charters or vouchers,” Hofmann said in a statement to the OCJ. “Ohio public schools must be welcoming, accepting and inclusive where ALL children are respected.”

Though all state board of ed races are considered non-partisan, the changes to the board are encouraging to the Democratic party as a whole and education associations in the state as well, despite “mixed results” in other general election races.

“I think having dedicated candidates who are going to reject some of the extremism we’ve seen on the state board of education … is really going going to help change the dynamic in terms of the issue and hopefully refocus the state board on really what students need,” said Scott DiMauro, president of the Ohio Education Association.

Elizabeth Walters, chair of the Ohio Democratic Party, praised “taking the majority” on the school board, saying the current school board “has become this dysfunctional show of what happens when we elect people who aren’t focused on the things that parents and students care about most.”

She also said the party worked to bring in candidates, and is prepared to recruit more in the future.

“We worked hard to recruit strong folks for these seats who have strong backgrounds in education and who can be advocates for what teachers and students really need to be successful here in Ohio,” Walters said in a Wednesday press call.