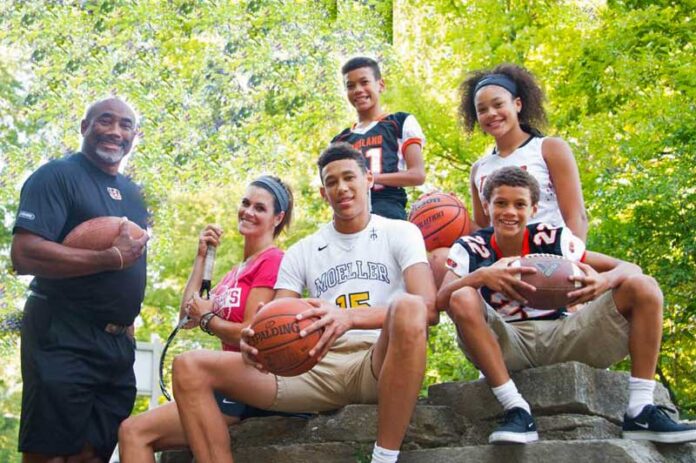 Kristi Kinne-Hayes grew up in Jefferson, a Green County, Iowa city made of 4,200 almost all white people. Kristi played six-on-six girls’ basketball and became one of the best players in the state.

A Guest Column by Independent journalist Daniel P. Finney who writes for paragraphstacker.com

She knew local police officers by their first names and thought of them as just another face in the crowd rather than law enforcement.

Kristi played college basketball at Drake University, leading the Bulldogs to an NCAA Tournament berth her senior season in 1995. She seldom thought about race even though she played alongside and was friends with people of different races.

She had a longtime friend who played softball at Drake who was mixed race and never knew until someone asked her friend about her race in a Kansas City bar.

But life, love and motherhood changed her perspective and her long journey from racial indifference, maybe even racial ignorance, to awareness and empathy is one all Americans — especially whites — need to take right now.

A background like Kristi’s makes it seem unlikely that she would comment on the ghastly death of George Floyd at the hands of Minneapolis police. But life, love and motherhood changed her perspective and her long journey from racial indifference, maybe even racial ignorance, to awareness and empathy is one all Americans — especially whites — need to take right now.

Kristi graduated from Drake, survived ovarian cancer and met and married Jonathan Hayes, a former University of Iowa tight end who played for the legendary Hayden Fry during the famed coach’s revitalization of the program in the early 1980s.

Hayes is also African-American. But a mixed-race relationship didn’t expose Kristi to the racial hatred the corrupts America’s soul.

The first time Kristi brought Johnathan home to Jefferson to watch a ballgame, fans swarmed the Hawkeye hero for autographs.

“That was so traumatic for me because when I was at the game, people came up for my autograph,” Kristi said. “I told Jonathan they only wanted his autograph because they already had mine.”

The couple settled in Cincinnati, where Jonathan served as tight ends coach for the NFL’s Bengals.

They had four children. Yet it wasn’t until their eldest daughter, the couple’s second child, turned 16 that evil racism finally struck the mother of four mixed-race children.

Kristi and Jonathan bought a new car and gave their older vehicle to their daughter. They put the old plates on their daughter’s vehicle and paid the fees, but Ohio Department of Transportation computers hadn’t yet processed the transaction.

She said, ‘I was sure they were going to shoot me.

Kristi asked her what was wrong.

She had been pulled over by police. The car tags were wrong.

“She said, ‘I was sure they were going to shoot me,’” Kristi said. “I thought, ‘Why would you think they would shoot you?’”

And the privilege of being a white star athlete from small town Iowa evaporated. She was now the mother of four children whose facial characteristics most white people would identify as black.

“If there’s a little bit of brown, to other white people, you’re black,” Kristi said.

Living with racism did not limit her children’s success. Eldest son, Jaxson Hayes, was a first-round draft pick by the NBA’s New Orleans Pelicans last year.

Daughter Jillian is a highly prized women’s basketball recruit committed to the University of Cincinnati.

Kristi reminds them that she doesn’t care if other people label them black only, just remember that their white mother and her family loves them just as much as their African-American father and his family.

“Your name is clean,” Kristi tells her kids, “keep it that way.”

Still, she worries. Jaxson is off in New Orleans, just turned 20 years old and having the time of his life as an NBA rookie despite the league shutdown due to coronavirus.

She tells her children that if they are pulled over, put their hands at 10 o’clock and 2 o’clock on the steering wheel.

“I never thought I would have to tell my children that,” Kristi said.

The true horror of this event: None of those officers moved to stop their fellow officer from committing a crime. It was depraved indifference.

Kristi saw the news reports and videos of a Minneapolis police officer putting his knee in the back of George Floyd, an African-American man suspected of forgery.

Three other police officers stood by and did nothing. They were all fired. As of this writing, it’s unknown if they will be criminally charged.

The killing of Floyd is a complete institutional failure by the Minneapolis police. That officer pressed his knee into the back of that handcuffed man’s neck as he pleaded for mercy, he could not breath and eventually lost consciousness and died.

He stared into the crowd almost as if he was daring someone to tell him he was wrong. The crowd pleaded with him to render aid, to check Floyd for injury or get him some water.

A friend of mine made this observation a few years ago: “There’s two things we learned from everybody having cameras on their phone: There are no UFOs and police sometimes kill people for no reason.”

The true horror of this event: None of those officers moved to stop their fellow officer from committing a crime. It was depraved indifference.

Here in Des Moines, some of my police sources told me they were aghast at another cop so drunk on power that his defiance led to the death of a man.

“When you have him in cuffs, get him up and in a car and off to the station,” one cop told me. “That diffuses the situation right there.”

Another cop told me police administrators were circulating a video by a top training instructor illustrating the dangers of the knee in the back hold and all Des Moines cops will have to sign off on having watched it.

There’s been little local backlash at Des Moines police because of the Minneapolis killing, but the danger of using national stories to paint local pictures hangs over every police station.

Kristi saw that news and it moved her. She lives in Cincinnati, a city that saw race riots in 2001 after police shot an unarmed African American teenager. Kristi and her family moved to Cincinnati after that terrible period.

So what does all this have to do with Kristi Kinne-Hayes, the great Iowa basketball star?

But motherhood long ago took the woman from Jefferson’s ability to be color blind.

Moved by the story, Kristi posted to her Instagram a trending meme of the officer with his knee in the back of Floyd’s neck and former NFL quarterback Colin Kaepernick kneeling during the national anthem. The caption read: “This is why.”

So what does all this have to do with Kristi Kinne-Hayes, the great Iowa basketball star?

“My white brothers and sisters, we need y’all’s help,” Acho said. African-Americans have been outraged as people continued to die unnecessarily, but white Americans have remained mostly indifferent or hesitant to raise their voice in protest.

We need to take the journey Kristi Kinne-Hayes took in her 46 years. She went from living blind to race because it never directly affected her to having a profound understanding of just how horrible racism is in this country.

I’m not saying you need to repost the meme or start hashtagging everything #blacklivesmatter.

But we must all do our very best to engage empathy for people who are not like us.

It’s very hard for anyone to see life through the perspective of someone who has lived so differently.

Our failure to do that is already too late for so many, the latest being George Floyd.

Listen to the Latest Episode…