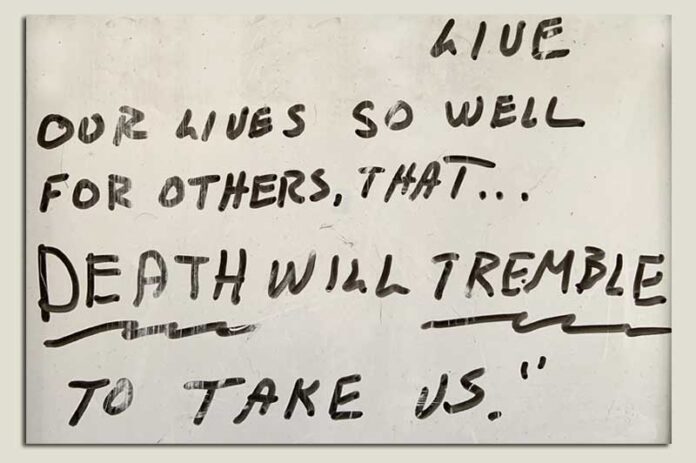 The photo above was taken from a whiteboard I wrote on five years ago that I now keep at the entrance to Loveland Magazine to serve as a reminder of what is ahead and why we keep on keeping on.

An Editorial by Publisher David Miller

I‘ve accomplished much and am quite satisfied with my life so far, but I deserve my old age and maybe even retirement someday. I feel I’ve earned it. I grew up in a Fire Department Family, a volunteer Fire Department Family. Before I was in school I helped raise money to buy the community’s first ambulance through community-wide auctions, and pig roasts. My mom and dad were “Great Depression Era” folks and taught me good lessons. I was raised on potato soup and shoveled coal into the coal-fired furnace. I helped count the dimes when my mom collected for March of Dimes. I learned to spot and identify enemy aircraft in the early stages of the Cold War when my father was in the Civil Air Patrol. I served in a combat zone in Vietnam. I’ve raised two wonderful children with my wonderful wife of 49 years and we have three lovely grandchildren, two now mature enough to be the best example of living a servant life.

I can only remember being fearful of death twice in my life. The first time was my first night in Vietnam when they made the newbies like me guard the perimeter of the basecamp. I’d been taken to the perimeter way past dark. In the morning light, I discovered I had lobbed hand grenades throughout the night at paper snarled in the barbed wire that rustled noisily in the night wind. The second time was when our firebase was under attack and I was a “short-timer” with one day left on my tour. Both times it wasn’t so much as a fear of death, but because there was so much more ahead for me and I wanted it all.

I’m of the baby boomer generation, however now called the “Vulnerable Generation”, but I’ve more to do before I go.

Now, don’t get me wrong. I don’t deserve any more “more” out of life than anyone else. Even the youngest of us deserve the “more”. Abundance was promised to all of us in the book of Genesis. But, I do want more days of celebrating with graduating high school seniors, more grandchildren’s birthdays, more quiet intimate conversations, and many many more days of dreaming and scheming – and teaching the Millennials and Generation Z’s how to do the same.

This is what I am asking you to do in return…

Let’s stick together while we ask each other to be apart.

I’m like Neil Diamond, neither of us are washing our hands of none of our responsibility, but we are washing our hands. I’m singing along with Neil and ask you to join us. We will sing Sweet Caroline from the football stands again. Until then let’s get this version earwormed.

I’m like Neil Young still searching for that heart of gold.

And, like Miu Miu, until I see you again – I wish you love.