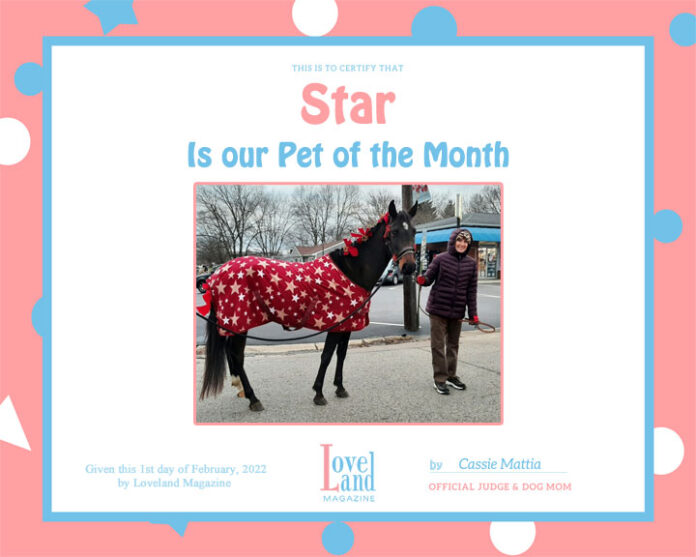 Loveland, Ohio – We are pleased to present Loveland Magazine’s Pet of the Month for February! The community of Loveland provided us with some lovely Pet of the Month photos and we are beyond thrilled to celebrate these local pets with YOU the readers!

“Star was on the brink of death, extremely malnourished and unable to stand on her own. Transporting her was a group effort involving the Reily Twp F.D., Kim and Joe Kinder of FCR, and many volunteers,” Mason explained, “Star arrived at FCR strapped to a stretcher and had to immediately be placed in a sling. FCR then made a plea on Facebook asking for help with her.”

Mason had recently lost her 33-year-old horse when hearing about Star needing help.

“I was somewhat depressed and looking for some purpose. Upon seeing Star’s photo, I wanted to help her,” Mason said, “They were just getting her in the sling when I arrived. She looked so tiny and frail. They started her on i.v. fluids then put blankets and heat lamps on her and we waited for the vet. As soon as she got those fluids and started to warm up, she started fighting us. As weak as she was, she had no trust in people and wanted to get away.”

Star required 24-hour observation while in her sling so a community of volunteers took turns watching over her. Mason said she was able to spend several nights with Star during this time.

“Kim from FCR didn’t give Star very good odds of survival. Horses at such a point of malnourishment and muscle wasting often have unseen organ damage they can never recover from. But there was something different about Star, her attitude and fight, I knew she was going to make it,” Mason said.

To everyone’s surprise, a few weeks later Star was able to stand on her own, go outside, and move around.

“Tanya Tieman, the owner of Equisports, provided Bemer therapy treatments for Star and some of the other horses at FCR. During the 1st week of March 2020, Tanya offered to let Star come to Equisports and stay for rehab and some training,” Mason said, “I was able to visit Star a couple of times, but then came the ‘covid lockdown.’ I periodically received updates from Kim, but wasn’t able to see Star.”

In June of 2020, Mason got an unexpected text message from Kim asking if she was interested in adopting Star. Mason jumped on the opportunity and decided to bring Star home just a few weeks later. A few months later after bringing Star home, Mason took her to compete in her first horse show where Star grabbed a 2nd place finish. Shortly after Star competed she then got the chance to be a part of the South Lebanon Christmas in the Village horse parade.

“What makes Star truly special is her attitude. She thinks the world revolves around her and that everything should be done ‘Star’s way.’ Kim often refers to her as a diva,” Mason said, “But that attitude made her a survivor. She’s also a wonderful ambassador for rescue. And this is just the beginning…she’s a rising star!”

Congratulations to Star’s adopted mother, Dawn, and Star for being selected to represent Loveland Magazine’s Pet of the Month for February! Dawn and Star will be rewarded with a Nothing Bundt Cakes Bundtlet Tower, a gift card to The Works Pizza, a gift certificate to Tara’s Pet Boutique and Doggy Daycare, and an 8X10 framable photo keepsake! Star will not only be featured in our publication but will also be included in our weekly newsletter for the month of February and our social media pages.

We would like to thank everyone who sent in photos of their pets as it was an absolute joy to see how many beautiful animals there are in our community! For those who sent in photos but weren’t selected this time around, don’t worry, as your entries will be entered back into the competition for the following month’s selection! For those that missed the deadline for February’s Pet of the Month, we will be taking entries from February 5th-25th for March’s Pet of the Month. Don’t be afraid to dress up your sweethearts in their finest Loveland Valentine’s Day gear!

Check out the video below created by David Miller that features Star as well as some of our favorite Pet of the Month entries!

To enter into Loveland’s Pet of the Month contest you must email me, Cassie Mattia, at cmattia12@gmail.com 2-5 of your favorite photos of your pet along with a short bio about your pet. Share with us and the community why your pet is so special to you along with any other unique facts that set your little buddy apart from other pets! When sending in your pet photos and bios please include your pet’s name, age, and breed as well as your contact info with a short description of each photo you provide us with. If you want to share where your pet’s favorite spots are in Loveland that would be great as well! Remember we DO NOT discriminate against any pets; all pets are welcome to enter into the contest!

Join us in celebrating Star for the month of February!

We can’t wait to see whose pet will be featured in March for Loveland Magazine’s Pet of the Month Sweetheart Edition!

Here at Loveland Magazine, we would like to send a personal shout-out to The Works Pizza, Tara’s Pet Boutique and Doggy Daycare, and Nothing Bundt Cakes Mason (nearby in Deerfield Township) for providing wonderful gifts to our winners!

Want to see previous Pets of the Month? Click here!

Columnist Cassie Mattia is a resident of Historic Downtown Loveland. She is the Co-Owner, Associate Editor, and Director of Marketing for Loveland Magazine. Contact her if you are interested in promoting your event or business in Loveland Magazine. Cassie also Emcee’s events so feel free to reach out if you are in need of an Emcee for your next event, fundraiser, or sports-related competition. Cassie was just awarded the Little Miami River Chamber Alliance 2021 Young Business Professional of the Year. Follow Cassie on Instagram and/or Facebook!