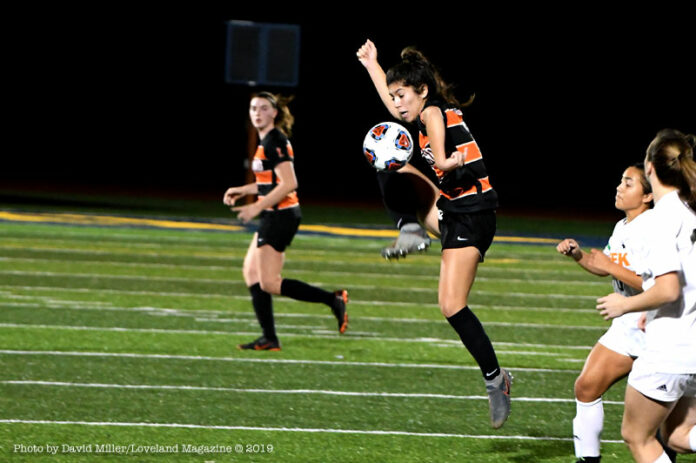 Monroe, Ohio – To get to the Regional Finals the Loveland Women’s Soccer Team had to beat the #2 team in the nation and a team that until Tuesday evening held the longest winning streak in Ohio history of 43 straight games. The Tigers won over Beavercreek, 3-2 in a game played at Monroe High School. Beavercreek, the reigning Ohio Div. I Champions had not lost a match since they lost in the post-season in 2017.

The Tigers play 19-0-2 Lakota West on Saturday at Princeton High School at 7 PM for the Regional Title. Loveland traveled to Lakota West on August 20 to open their season and lost 1-2.

In 2017, Loveland High School soccer competed for the Division I state title at the Columbus MAPFRE stadium and beat Perrysburg High School 1-0, earning Loveland the OHSAA state championship. Loveland competed in the state championship in 2015 and fell to Walsh Jesuit. They are currently on a 12-game winning streak and have a 16-3-0 record.

Here is a slide show of photos taken at the victory over Beavercreek. All photos are © protected but you can purchase high resolution files by sending an email to Loveland Magazine.