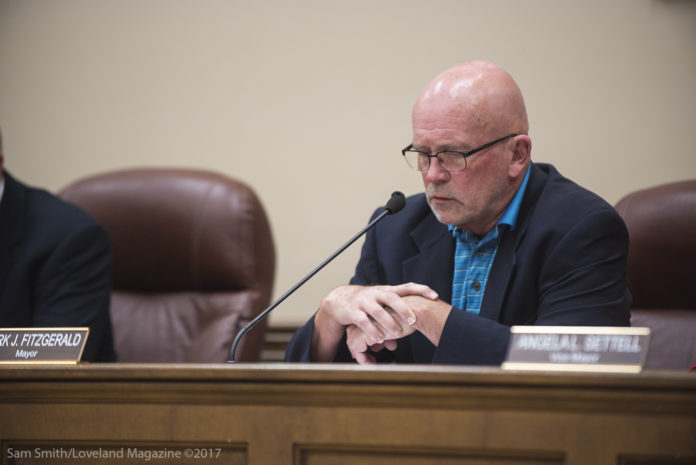 “There is little doubt in my mind of prevailing in an election this fall. It’s a shame that a small group has seen fit to drag the city’s great image through the mud to further their vicious and unfounded personal attacks on me.”

Loveland, OH- On the evening of Monday, August 14th, then-mayor Mark Fitzgerald called a meeting to order. The special meeting was, according to a press release, intended to “respond to matters related to the recently filed petition seeking his recall as a member of City Council”. Fitzgerald would go on to resign his seat as mayor. Angela Settell took his place as Mayor and Pam Gross was named Vice-Mayor. After adjournment, a letter was distributed explaining that Fitzgerald would resign his council seat.

Fitzgerald, who has served ten years as an elected individual and was two years into his term as mayor, began the meeting with a speech. Fitzgerald was once Loveland’s City Manager.

“There is little doubt in my mind of prevailing in an election this fall. It’s a shame that a small group has seen fit to drag the city’s great image through the mud to further their vicious and unfounded personal attacks on me,” Fitzgerald began.

In his address, he defended his personal integrity and criticized the petition and those circulating it who were seeking his recall, calling it “nefarious activity”. He went on to attack the political action committee (PAC) that funded the petition and individuals who had helped run the petition for recall.

“Who are these people? Do they live in Loveland? Who are their sponsors? Based on the PAC’s financial report, they shouldn’t be able to afford much expensive legal help. What are their names? Some seem to have multiple names. What is their past profession? How have they performed professionally? Are they successes? Or are they business failures? Bankrupts? Do they frequently change addresses, names or jobs? What are their work records? Do they work?” asked Fitzgerald.

“Have they received special considerations that have to do with these relationships such as forgiven utility bills or no interest loans?” the mayor continued, to incredulous laughter from the audience.

Fitzgerald denounced the language and accusations in the petition for vagueness, and made tacit jabs at individuals and members of the local media.

Fitzgerald then resigned his position as mayor (although not his council seat).

“Watch out…” Fitzgerald gestured to the audience “…For wolves in sheep’s clothing.” This was met with boos and jeers. “At this time, I would like to be relieved of my position and duties as mayor, and will entertain a motion from council for the selection of a new mayor,” finished Fitzgerald.

A a long time Loveland resident and voting Stakeholder of the Loveland Community Heartbeat Political Action Committee, Ellen Mershon responded to Fitzgerald’s speech. She said, “I was appalled at Mr. Fitzgerald’s attempt to deflect any responsibility regarding his own behavior both personally and professionally by his attempt to cast dispersions on others.” She said that the behavior the former Mayor exhibited only illustrated the need for the recall. “I am grateful for the voters who came forward to sign petitions, not once but twice for his removal,” said Mershon.

In order to fill the vacant mayor position, a nomination and council election was performed. Previous Vice-Mayor, Angela Settell, was sworn in as mayor by Fitzgerald. Next, in order to fill the vice-mayor seat, council member Pam Gross was nominated and elected. 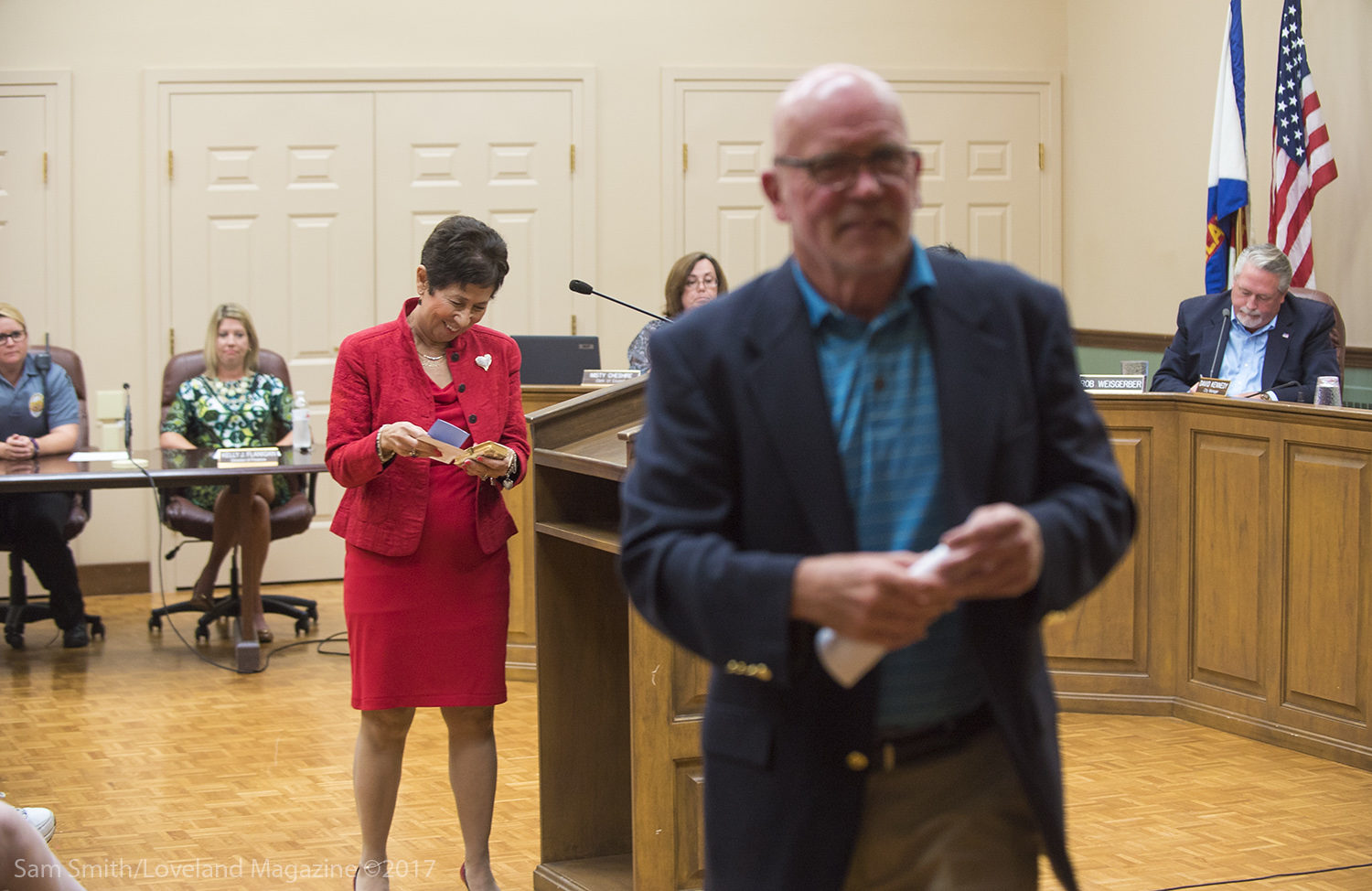 Upon adjournment, Fitzgerald still held a seat in City Council, but had until midnight to resign or else face a recall vote. Fitzgerald refused to speak to the press. New vice mayor Pam Gross declined to interview.

“[Fitzgerald] has stepped down as mayor, so there will be no recall in November,” Mayor Angela Settell explained to Loveland Magazine. Shortly thereafter, a letter from Fitzgerald to Council Clerk Misty Cheshire was distributed:

Ten years is a long time to serve in an elected position. There is wisdom in the 22nd amendment limiting term of office for the President. Subsequently, the state of Ohio has done likewise for its governor and general assembly. If it is good policy for the country and state it should be applied to Loveland Council as well.

“Council will have 30 days to reach an appointment. If they can’t reach an agreement within those 30 days, Mayor Settell will have the ability to fill that seat. Under our charter in Loveland, that person will fill that seat for the unexpired term of councilmen Fitzgerald,” expalined City Solicitor Joe Braun. There are two years remaining in the term. “If he had waited past those 5 days [the maximum amount of time to resign], a recall vote could have been held by the people,” continued Braun.

“My feelings are one of disappointment– this didn’t have to happen tonight. I don’t think anything had to happen this way. The notice was too short, it wasn’t open to the public which is what this has all been about,” claimed council member Rob Weisgerber in an interview after the meeting. “We have a bad reputation but it’s easy to fix. Once we start having an open dialogue, open to the public, open to discussion, it’s easy to turn this back around. And I think that’s what we have to go though,” Weisgerber continued.

Ted Phelps described the election of a new mayor and vice-mayor as clique politics, stacking the deck, and gaming the system.

Councilmember Ted Phelps said, “I am mad. It’s to the public’s detriment. I’m sorry this happened tonight.” He described the election of a new mayor and vice-mayor as clique politics, stacking the deck, and gaming the system. “There was no reason why we needed to vote on a new mayor and vice-mayor today. The public didn’t know this was coming up for a vote. I didn’t know.” Phelps said no one had time for serious consideration on an important issue. “This is exactly why people are up in arms about the way the City conducts business on City Council – because it is in a way that’s not up front, it’s not honest. It’s not fair because someone who could be resigning from our Council tonight is given the right to have a say in who gets elected to be the next mayor. So it’s for that reason I am not at this point in time able to congratulate either the new mayor or vice-mayor.

Neal Oury who was a leader in the ouster of Fitzgerald and intimate in the two successful recall petition drives issued this statement to Loveland Magazine:

This little “small group”, as he called the Recall Committee, is many in size, with over thirty petitioners collecting signatures, 2000 plus residents behind us, not once – but twice, makes a profound statement. Those signing the petitions equal approximately thirty-five percent of all the residents who voted in the last election. They were certified by the Board of Elections as Loveland residents. Their “professions, successes, failures and utility bills” are immaterial and, frankly, an insult to the community. The resigned ex-mayor’s unprofessional rant last night was like so many other council meetings he has presided over. The disorder, rude, verbal attacks and skullduggery are always evident. He is the one who has dragged the city’s image through the mud.

This LOVELAND MAGAZINE TV video is the resignation speech Fitzgerald gave to start the Council meeting.

Loveland Magazine kept the camera live feed rolling and conducted several interviews after the meeting adjourned. Near the end reporter Sam Smith reports that Fitzgerald had submitted a letter of resignation.

Mayor does not need to call a “Special Meeting” to comply…

Recall of Mayor Mark Fitzgerald is “On” again

After enjoying a day out, stop by and relax with your favorite desert in our picnic area