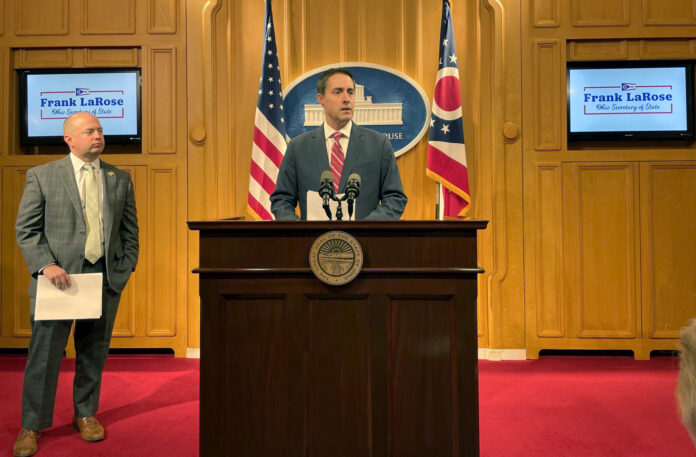 Lawmakers raised two ideas Thursday with massive implications for Ohio voters. One is an initiative requiring citizen-led constitutional amendments gain a 60% supermajority at the ballot for passage, the other is a House bill aimed at rewriting the underlying infrastructure of how the state conducts elections.

“We have repeatedly watched as special interests buy their way onto the statewide ballot and then spend millions of dollars drowning the airwaves to secure fundamental changes to our state by a vote margin of 50% plus one vote,” Stewart argued.

Their plan singles out the citizen-led process for amending the state constitution and raises the threshold for passage to 60%. The signature threshold for making the ballot would remain unchanged. LaRose argued lifting that benchmark would give the same interest groups a relative advantage.

The stakes are high for any groups whose ideas have fallen on deaf ears in Columbus. The prospects for abortion protection, recreational marijuana, minimum wage increases, gun violence prevention, or further redistricting reform provisions are effectively non-existent in the GOP-controlled Statehouse. LaRose and Stewart’s proposal would move the goal posts for any of those ideas.

The proposal itself, of course, will need to go to voters and get just 50% plus one to alter the Ohio Constitution. It will follow a different process, too. Stewart’s resolution would make the ballot through a General Assembly vote rather than the citizen signature-gathering process.

That lawmaker-led process won’t see any changes in the threshold for passage, either. LaRose and Stewart dismissed any suggestion their approach is unfair. Lawmakers have to meet a supermajority benchmark, too, they argued. It’s on “the front end” where they have to clear a 2/3 supermajority to make the ballot.

Under maps declared to be unconstitutional gerrymandering by a bipartisan majority on the Ohio Supreme Court, Ohio Republicans once again won rock-solid supermajorities in the Ohio House and the Ohio Senate last week.

LaRose and Stewart highlighted how 11 of 16 citizen-led amendments have failed since 2000, so it wasn’t clear exactly why they want to raise the bar higher as they also noted of the five measures that passed, three cleared 60% at the ballot box.

Those provisions would’ve leaned heavily on the Bureau of Motor Vehicles to help voters register or update their registration any time they interact with the agency. If voters’ registration is regularly updated, the thinking goes, there will be fewer names to purge. But Seitz said after months of negotiations, the Ohio Senate hasn’t budged.

“If we’re going to get anything done,” Sietz said, “we’ve got to have an agreement between two chambers, and the Senate does not yet feel comfortable with automated voter registration, even though I am comfortable with it.”

“But it takes two to tango as they say,” he added with a wry chuckle.

Drop boxes would be available for the duration of early voting, but they’d be restricted — no more than three, all on board of elections premises and under 24/7 video surveillance.

The bill eliminates the final day of early voting but distributes those hours in the week prior by extending weekday hours.

Seitz also dropped a number of ID provisions from the original bill. He noted Senate legislation plans to offer free photo-ID to anyone — not just poor Ohioans as his bill envisioned.

“They can be, you know, Leslie Wexner or Carlin Lindner III and they could still get a free photo ID,” he quipped referencing the founder of The Limited and the co-CEO of American Financial Group.

A slew of press releases were released Thursday afternoon from good government groups and voters rights organizations slamming the Stewart and LaRose proposal to increase the passage threshold for citizen-initiated amendments.

As for the Seitz proposal, voting rights advocates applauded the inclusion of online ballot requests and funding for electronic poll books. But League of Women Voters of Ohio Director Jen Miller warned the proposal would make elections “more complicated, expensive and inefficient.”

Miller also pushed them to reconsider the automated voter registration they’d just removed. She argued 22 other states have similar policies including West Virginia, Georgia and Michigan.

“It removes barriers to registration, but it also helps every voter because the accuracy of voter rolls are improved and it can reduce administrative costs for the boards of elections,” Miller explained. “And we reduce our provisional ballot counts which are typically very high in Ohio.”

Miller returned to the idea of excessive provisional ballots in a discussion of stricter voter ID requirements.

“When someone votes provisionally, which of course we support, that actually takes away all workers from the process,” Miller explained. “It increases lines, and it also increases a lot of post-election work for boards of elections. So we think that the system as is works.”

Speaking afterward, Seitz rejected out of hand the idea that more stringent voter ID requirements could increase the number of provisional ballots cast.

“I don’t buy that at all, that’s crap,” he said, “look at everything you need a photo ID for in life, okay?”

Nick Evans has spent the past seven years reporting for NPR member stations in Florida and Ohio. He got his start in Tallahassee, covering issues like redistricting, same sex marriage and medical marijuana. Since arriving in Columbus in 2018, he has covered everything from city council to football. His work on Ohio politics and local policing have been featured numerous times on NPR.
MORE FROM AUTHOR