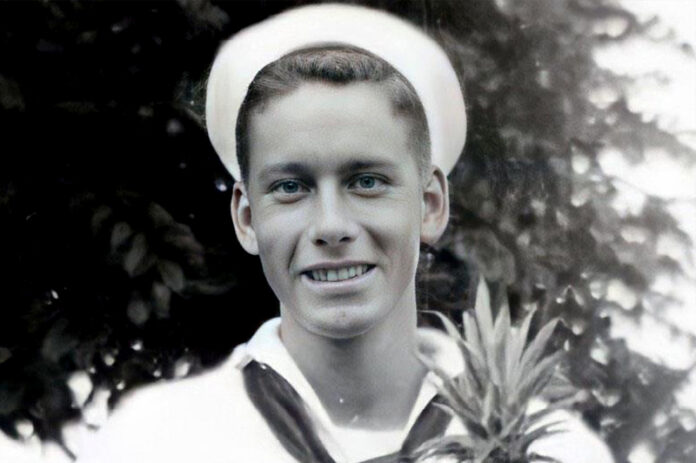 Chillicothe, Ohio – Musician 1st Class Joseph Hoffman was born in Lyndon, Ohio, and raised in Chillicothe. He gave his life aboard the USS Oklahoma during the attack of Dec. 7, 1941, will have his remains buried in Greenfield Cemetery, Greenfield, Ohio, on August, 20. He was the son of Lloyd Harry Hoffman and Donna Wornstaff.

Hoffman enlisted in Cincinnati on January 10, 1938

Hoffman was a member of the service’s Special Branch. He was one of the musicians who performed at ceremonies while marching in military formation, and in band or orchestra for entertainment for civilian and military personnel.

Prior to the 2015 disinterment, which marked the beginning of Project Oklahoma, 388 service members were unaccounted for. Since then, 355 have been individually identified.

On Saturday, August 20, 2022, at 11 AM the funeral procession for Musician First Class Joseph Hoffman will travel from Greenfield to the Ross County Veterans Memorial Park on Yoctangee Boulevard in Chillicothe.

After the ceremony, a motorcade will proceed from Veterans Park to the Greenfield Cemetery for graveside services.

An open house at the Joseph W. Hoffman American Legion Post 757 on Cooks Hill Road, south of Chillicothe will be held in Hoffman’s honor on Friday, August 19th. The family-friendly event will begin at noon with a free picnic lunch being served. There will be many children’s activities and documentaries and films related to Pearl Harbor will be shared. The formal program begins with an opening ceremony at 3:30 PM. The Huntington High School Band will play and the Greenfield-McClain High School Cadet Corps will perform a drill presentation.

The ceremony will end with the Ross County Veterans Honor Guard Flag Burning Ceremony. Joseph Hoffman attended the Tyler Methodist Church, formerly the Tyler Brethren, at the corner of Mill and Church Streets in Chillicothe, before enlisting in the Navy.

On Sunday, August 21, at 11 AM Notable Souls Tour will be offered from 1:00-5:00 p.m. for a fee of $10.00 with tour booklets available for $5.00. The tour will include the burial sites of 43 members of the military who died in the service during wartime between the Mexican War and Vietnam. The Chillicothe Civic Theater Actors will give live interpretations of ten of these and Joseph Hoffman’s story will also be shared.

Musician 1st Class Joseph Warren “Hope” Hoffman, age 24, passed away December 7, 1941, while serving aboard the USS Oklahoma during the attack on Pearl Harbor. Joseph was among 429 sailors on that ship who perished, of which only 35 were identified. His remains were recovered during World War II, but could not be identified until 2020 when scientists used anthropologic and DNA analysis to confirm his identity.

It is ironic that Joseph may be known not only as the first casualty of World War II from Ross County, but also the last to be accounted for and returned home for burial.

He was born on September 3, 1917, in Ross County, Ohio, the son of Lloyd Harry and Donna E. (Wornstaff) Hoffman.

In 1948 the American Legion Post 757, 289 Cooks Hill Road, Chillicothe, Ohio was chartered and named in honor of Joseph W. Hoffman.

He was a 1936 graduate of Chillicothe High School and a member of the Tyler Memorial United Brethren Church (now United Methodist Church). Joseph was a multi-instrumentalist and talented musician who performed regularly in church and as part of the school band, orchestra, and News Carrier Boy’s Band.

Prior to enlisting in the U.S. Navy in January of 1938, he delivered newspapers and worked as a soda jerk at the Sulzbacher and Erdmann Drug Store.

The funeral service will be 11 A.M. Saturday, August 20, 2022, at the Ross County Veterans Memorial Park, 225 Park Street, Chillicothe, Ohio. Burial will follow in the Greenfield Cemetery with Military rites provided by the U.S. Navy. The Murray-Fettro Funeral Home in Greenfield is serving the family. Condolences may be sent to www.murrayfettro.com

USS Oklahoma, a 27,500-ton Nevada class battleship, was built at Camden, New Jersey. She was commissioned in May 1916 and generally operated in the Atlantic over the next five years. In mid-1918, Oklahoma went to European waters to help protect convoys. Late in that year and in June 1919, she escorted President Wilson during his voyages to and from France. In 1921, the battleship moved to the Pacific, visiting the west coast of South America prior to joining the Pacific Fleet. During most of the rest of the decade, Oklahoma served with the Battle Fleet during its many exercises, drills and Fleet Problems. She participated in the Fleet’s trans-Pacific cruise to Australia and New Zealand in mid-1925. In the summer of 1927, she transported Naval Academy Midshipmen from the east to the west coast during their annual training cruise.

Oklahoma was modernized at the Philadelphia Navy Yard in 1927-29, emerging with a greatly altered appearance and notably improved battleworthiness. After brief service with the Scouting Fleet, she returned to the Pacific in mid-1930 and renewed her participation in the Battle Fleet’s activities. In July 1936, Oklahoma was sent to Europe to help evacuate U.S. citizens and others during the Spanish Civil War. She rejoined the Battle Fleet in the Pacific later in the year.

In 1940, Oklahoma’s base was shifted from the U.S. west coast to Pearl Harbor, Hawaii. She was at Pearl Harbor when the Japanese attacked on 7 December 1941. Moored outboard of USS Maryland (BB-46), she was hit by a great number of Japanese Type 91 aerial torpedoes. With her port side torn open over much of its length, Oklahoma rapidly rolled over and sank to the harbor bottom, with the loss of over 400 of her crew. Many of the men trapped in her upturned hull were cut free through the intense efforts of Sailors and civilian Navy Yard employees.

During 1943, Oklahoma was the subject of a massive salvage undertaking, involving turning her upright, patching her damages and refloating her. She was drydocked late in the year to be stripped of guns and other equipment and repaired sufficiently to make her relatively watertight. Too old and badly damaged to be worth returning to service, Oklahoma was formally decommissioned in September 1944. She was sold for scrapping in December 1946 but sank while under tow from Hawaii to California in May 1947.