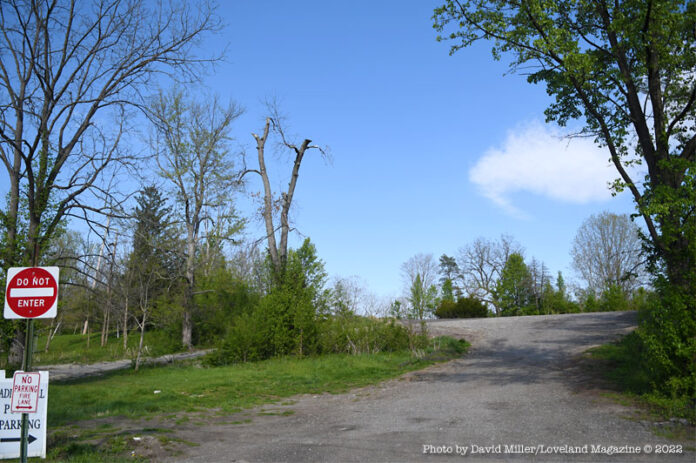 *Please read this CORRECTION to this story.

“It is not known whether the ‘mound’ remains or is an Indian mound, but it is possible.” – Hamilton County Community Development

Loveland, Ohio – The possibility of Native Americans’ remains under the site of a proposed parking garage on a hill in “Historic Downtown” may give a new connotation beyond the history of White settlers and developers of the area.

At Monday’s City Council meeting, both Lauren Enda and Tom Scovanner reported that they have come into possession of a 2019 report by a preservation consultant that was commissioned by Hamilton County. The report says there is some potential for “archaeological resources” on the property. The report was based on an 1848 map of Loveland. The consultant said the map identifies a “mound” at the location. The report was commissioned because Loveland was seeking federal dollars to demolish two houses on the site and the money Loveland was seeking, was ultimately federal dollars. According to Enda and Scovanner, the report concluded that there was no historical significance to the houses so the City was given a green light to proceed with removing them.

However, after the houses were removed, the City proceeded to do excavation on the hillside to make a temporary overflow parking lot to mitigate parking congestion in “Historic” downtown apparently without the knowledge of the reported mound that may contain the remains of American Indians who once lived on the bank of O’Bannon Creek which abuts the hillside. O’Bannon Creek enters the Little Miami River a few hundred feet downstream.

Enda says that as soon as she received the report she immediately put in a call to City Manager Dave Kennedy who could not be reached. She then sent the report to both Kennedy and Councilmember Andy Bateman on April 8. She sent it to Bateman because he is the council’s representative on the City Historical Preservation and Planning Commission (HPPC). Bateman is a sitting member of the Commission.

Enda’s presumption was that Bateman would forward the report to all of the HPPC members, however, the report was not brought up or discussed at their next meeting. She had asked Bateman in an email, “Please share with the other members as I do not have their addresses.” She said on Monday that she was surprised that it was not discussed at the HPPC meeting.

After Enda and Scovanner gave speeches during the open forum at Monday’s council meeting, there was also no discussion between Council and the City Manager. She said on Monday that she did not hear back from either Kennedy or Bateman after she sent them the report. *

City Manager Kennedy told Loveland Magazine via email that he first knew of the report when Enda sent it to him on April 8 at 2 PM. He said that subsequently, the Ohio Historic Preservation Office contacted him and they are scheduling a time to discuss the matter.

The Hamilton County Community Development Historic Preservation Review worksheet says, “It is not known whether the ‘mound’ remains or is an Indian mound, but it is possible. The area appears topographically similar to other areas with Indian mounds. Locations on a bluff or hill overlooking a flat river or creek bottom always have high probability for prehistoric sites of all time periods.” It concludes, “The property is not considered eligible for historic architecture for the purpose of demolition, but consultation with the State Historic Preservation Office regarding the need for an archeological survey is recommended if a federal permit or funding is involved for new construction.”

Enda said at the council meeting that according to Loveland’s Director of Finance, Mark Medlar, Loveland taxpayers have already spent $980,000 on purchasing the site, demolition, and design engineering for the “multi-million dollar” proposed garage.

Enda wants Council to commission an archaeological survey of the property which she says is the recommendation of the Ohio History Connection. The Ohio History Connection was formerly the Ohio Historical Society and carries out history services for Ohio and its citizens focused on preserving and sharing the state’s history. This includes housing the state historic preservation office, the official state archives, local history office and managing more than 50 sites and museums across Ohio.

Enda has advocated for months for residents to be given the chance to vote the proposed parking garage up or down at the ballot box.

She says that if there are Indian remains at the site they should be treated with respect and dignity.