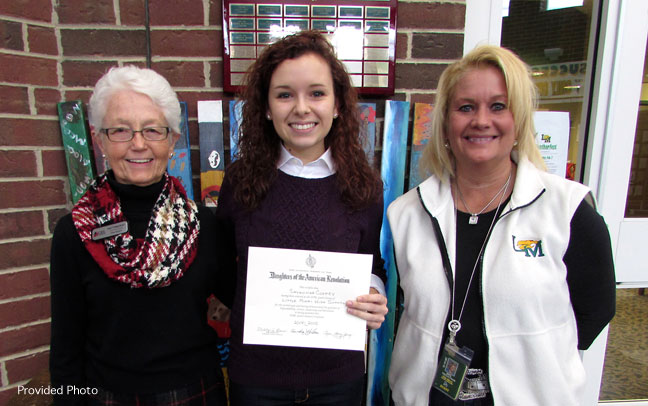 Morrow, Ohio – Little Miami High School senior Savannah Coffey has been named the statewide winner of the Daughters of the American Revolution’s Good Citizen Award. She now advances to consideration nationally and is eligible for up to a $5,000 scholarship.

Coffey previously won the Good Citizen Award for the school, for the Turtle Creek chapter, and for the Southwest District. She won a $200 prize for winning the district, and then won an additional $500 when named the statewide winner at a banquet March 28 in Columbus.

“It was so neat to be recognized at that level,”Coffey said. “It was kind of a validation of how hard I’ve worked and everything I’ve done so far.”

The award requirements are for the student to demonstrate dependability, service, leadership and patriotism. Applicants, who can be boys or girls in their senior year, are judged on a written description of how they try to manifest the qualities of a good citizen and on their performance in a timed essay.

Coffey boasts excellent academic performance and has been recognized as a National Merit Commended Scholar. She serves as president of the school’s National Honor Society chapter, through which she does extensive community service, and is also president of the marching band. She plays mellophone in the marching band and clarinet in symphonic band.

“We had recognized all along that we had a very special lady here,” Russell said. “We’re very proud of Savannah.”

Coffey will advance to national judging, which goes in stages. First she’ll be competing in a region-type group of states, and if she’s the winner of that region, she’ll be a national finalist and considered for the overall national top prize. The process will be finished by sometime in June.

The national winner will be announced in late June at the DAR’s Continental Congress in Washington D.C.