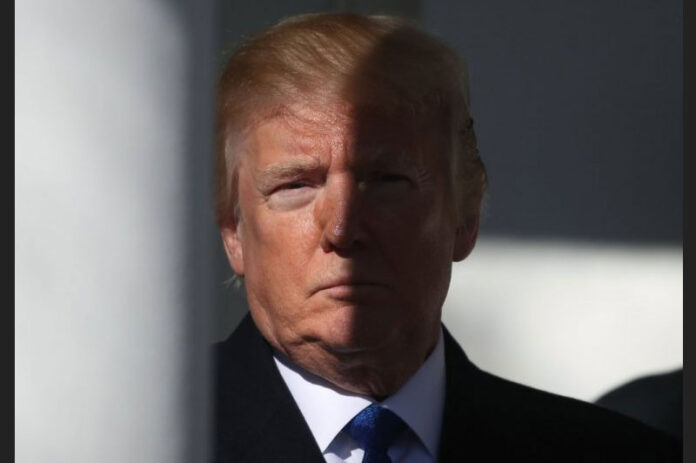 U.S. President Donald Trump stands in the colonnade as he is introduced to speak to March for Life participants and pro-life leaders in the Rose Garden at the White House | Mark Wilson/Getty Images.

Washington DC – Members of Congress and senators had not yet emerged from a Capitol lockdown caused by a mob of violent, rioting Trump supporters before key Democrats began calling for impeaching the president and consequences for politicians who egged on the violence.

Progressive members of the U.S. House, including congresswomen who are members of the expanding so-called Squad, appear to be among the first to call for Congress to dole out swift punishment to President Donald Trump and other Republicans who have stoked the conditions that led to this moment.

Around 2:30 p.m., U.S. Rep. Ilhan Omar tweeted to let her supporters know she was safe, and that “Running for our lives as Members of Congress in the United States is really devastating and totally shocking.”

An hour-and-a-half later, the Minnesota Democrat’s shock shifted to indignation. Omar announced to her Twitter followers that she is drawing up Articles of Impeachment, just minutes after Trump released a video message on his own Twitter account.

Trump dug in on his false statements that the election was stolen from him and called for protesters to go home.

“Donald J. Trump should be impeached by the House of Representatives & removed from office by the United States Senate,” Omar wrote. “We can’t allow him to remain in office, it’s a matter of preserving our Republic and we need to fulfill our oath.”

Omar, through a spokesman, declined a request to comment later Wednesday.

The House impeached Trump in December 2019 for abuse of power and obstruction of Congress. The Senate acquitted him in February 2020.

Soon after Omar’s tweet, U.S. Rep. David Cicilline, a Rhode Island Democrat, member of House leadership, and a fellow member of the House Progressive Caucus with Omar, tweeted that he is circulating a letter to gain signatures and then send to Vice President Mike Pence.

Cicilline called for Pence to invoke the 25th Amendment, which could allow a majority of the Cabinet to remove the president and install the vice president as acting president if Trump is deemed unfit to do his duty.

“Vice President Pence can help put down this attempted coup if he wants to,” Cicilline tweeted. “If he doesn’t, then Congress should go ahead and impeach the President.”

Cicilline, who said he was in lockdown, was not immediately available for an interview.

U.S. Rep. Jennifer Wexton of Virginia appeared to signal on Twitter Wednesday afternoon that she, too, would support removal or impeachment. She wrote that Trump has been encouraging these “domestic terrorists” since before the election.

“He could have stopped them at any moment, but instead he whipped them into a frenzy and sicced them on the Capitol,” she wrote. “The Cabinet must remove him today or the House must impeach.”

Other Democratic members joined in: Newly elected U.S. Rep. Carolyn Bourdeaux of Georgia also tweeted that Trump bore “personal responsibility” and should be impeached; U.S. Rep. Mark Takano, a Californian, tweeted that Trump had “encouraged and incited the violence,” and that “he deserves to be impeached tomorrow and should be barred from ever holding federal office again.”

As the sun fell, more and more Democrats began calling for immediate action to impeach Trump.

Those included New Jersey U.S. Rep. Bonnie Watson Coleman, who wrote that, “This behavior cannot be forgiven or ignored. U.S. Sen. Ed Markey of Massachusetts said Trump should be impeached.

President-elect Joe Biden is set to be inaugurated on Jan. 20, so Congress would have just two weeks to act on impeachment, a process that in the past has stretched over months.

Just focusing on Trump was not enough for newly seated U.S. Rep. Cori Bush (D-Mo.), however.

“I believe the Republican members of Congress who have incited this domestic terror attack through their attempts to overturn the election must face consequences. They have broken their sacred Oath of Office,” she tweeted out to her followers. “I will be introducing a resolution calling for their expulsion.”

Other Democrats expressed their support for Bush’s effort, including New York U.S. Rep. Mondaire Jones and New Jersey U.S. Rep. Bill Pascrell, who both indicated they would support the drive to expel some of their colleagues from Congress.

Still, for many, more immediate concerns were at hand: The mob had interrupted the counting of electoral votes to certify the election, and many members expressed that it is imperative for them to get back to work and continue their constitutional duty.

Among them was Virginia U.S. Rep. Gerry Connolly, a Democrat who said in a short interview that he is calm and determined to return to the House chamber and ratify the election.

“I’m itching to get all clear and finish electoral ballot counting,” he told States Newsroom. “We cannot be deterred by this intimidation or violence. Today the truth will prevail, at last.”

Daniel Newhauser is a freelance journalist based in Washington, D.C. His work has appeared in the Atlantic, Roll Call, VICE, National Journal and several other publications.