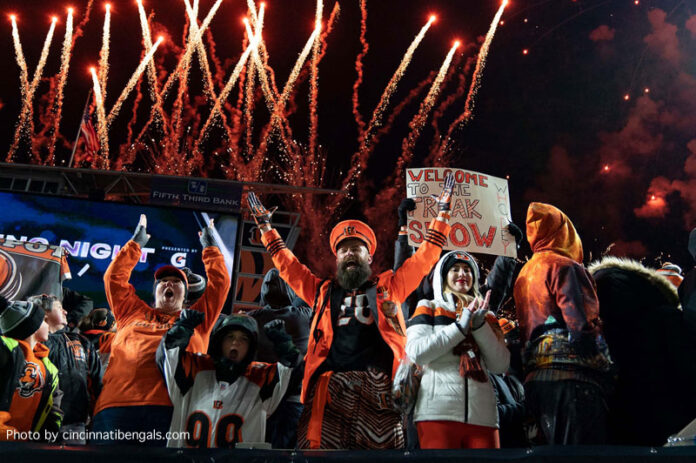 If Joe Burrow is the soul of the Bengals then here came the heart of the Bengals Monday night as Joe Mixon headed into the Paul Brown Stadium locker room filming the fans chanting “Who Dey” through their 28-degree breath.

“A great sendoff,” Mixon said as the fireworks ending a roaring Super Bowl pep rally smoked like one of his Drew Estate victory cigars. “I’ve never seen anything like that before or experienced anything like that in my life. I thank them for my teammates. I love them, too. It was a huge moment, a historic moment and we’re looking to have many more.”

The Bengals took the field in their Super Bowl LVI white sweat suits as an estimated crowd of about 30,000 offered a thunderous sendoff to Tuesday morning’s flight to Los Angeles and Sunday’s appointment with the Rams to decide the NFL championship.

They serenaded Burrow with an “MVP, MVP,” chant. They went nuts when tight end C.J. Uzomah ripped off his brace from the knee he injured in Kansas City. They screamed when hometown punter Kevin Huber told them, “Hopefully we’ll be back next week for the after party.”

“I’ve got goose bumps,” said Jim Foster, better known as Bengal Jim, who MCed the hour-long production with comedian Gary Owen. “And the great thing is that for about a half or two-thirds of them, they’ve never experienced something like this before. They weren’t here or weren’t old enough for ’88. I’m so happy for this city. And another great thing about it is how many kids were there.”

Heck, the players on the first two Super Bowl teams had never experienced anything like it. Max Montoya, the right guard on both teams, Ken Anderson, who quarterbacked the first one and safety David Fulcher, who helped lead them to the second one, found themselves in a holding room as guests of the club for the rally and couldn’t remember anything like this back in the day.