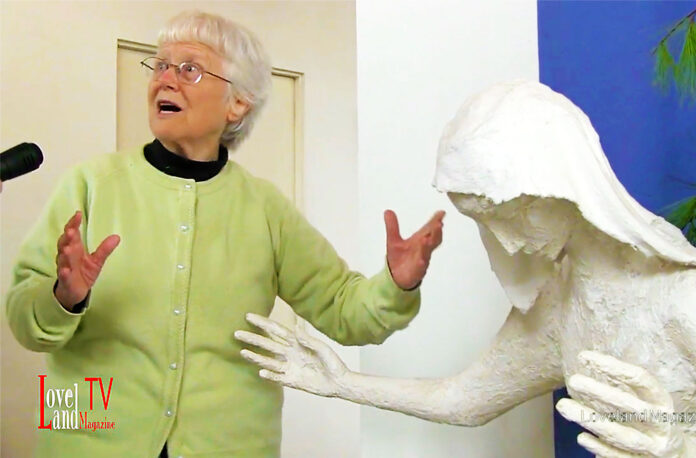 Our continuing series about Grailville and its rich cultural past

Loveland, Ohio– This interview with artist Trina Paulus by Alana Johnson was 11 years ago and conducted during the Advent season. We are into Holy Week, however, this interview will give you a nice glimpse into Grailville at the time and a “Way-Back Machine” view. Not much is being said about the dining hall at Grailville, however, with its large open space and expansive glass wall it was the perfect place to showcase art and you will see some extraordinary art in this interview.

Paulus came to Grailville in 1949 as a teenager. She said it was a magnificent change for her even though the living circumstances then were extremely simple and sometimes primitive. “The cultural experience was a high art form.” She now lives in Montclair, New Jersey, however, returned to Grailville for the Advent Season in 2011 to talk about her work, as well as Grailville’s collection of over forty Nativity scenes from around the world.

Paulus started sculpting at the age of eight in Cleveland Heights, Ohio with mud from the creek in her back yard. She won national awards as a high schooler. She is now 90 years old and doing well.

In this LOVELAND MAGAZINE TV VIDEO, Reporter Alana Johnson interviews Paulus in the dining hall at Grailville where Paulus had many of her Advent sculptures on display as part of their International Creche Exhibit.

Of particular interest in the interview is Paulus’ description of life at Grailville in 1949 and the spiritual life there. Paulus describes life on the Grailville farm as a magnificent change for her. She said it seemed she was living in the Chartres Cathedral. “Our cultural life was a high art form.”

In 1972, Paulus wrote the book, Hope for the Flowers. It is now translated into many languages and there are over two million copies in print.

Grailville, just outside of Loveland was an environmental, education, and retreat center of The Grail, an international women’s movement. At the time of this interview, it was located on 300 acres, with organic gardens, hiking trails, woods, pastures, ponds, creeks, modest guest housing, and solitude.

To read more about the rich history of Grailville and its cultural significance check out Loveland Magazine’s: