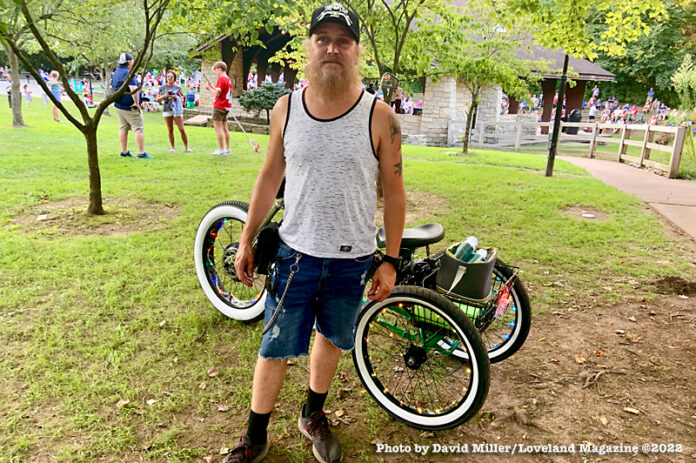 “You want to try one out?”, asked Shannon Meadors.

Loveland, Ohio – It took me from Sunday evening until Tuesday morning, and bugged me to no end till I realized why I came about two feet from crashing a $2K electric tricycle into one of the concrete picnic tables at Nisbet Park. You don’t “lean” to turn it, you actually do turn the handlebars.

“You want to try one out?”, asked Shannon Meadors.

I was in Nisbet Park listening to the very cool sounds of My Brother’s Keeper, a Cincinnati-based progressive bluegrass band that has played venues all over the country.

When I spotted the stream of adult trikes rolling into the park my first thought was, well this is very cool, ya never know anymore what ya might see on the Loveland Bike Trail these days. The second was, in the 1960s, Loveland was infamously known for criminal biker gangs. This sight put a different spin on Loveland history for me.

Describing he and his twin brother Shawn’s creations, Shannon says, “how fast do ya wanna go?” They have capable speeds up to 30 mph with disk brakes in front and deluxe mirrors mounted on some stunning ape hanger handlebars.

Throttle King Custom Bicycles can build you a custom-style chopper at their fabrication shop in Amelia.

Shannon and Shawn worked for a metal manufacturer for 20 years before they became unemployed earlier this summer when the business moved to Mexico. They turned to their side gig to make ends meet.

“You don’t realize how much you like riding bikes until you get a really cool, comfortable bike,” said Shannon. His 82-year-old father is back out on a bike again riding one of the custom trikes almost every day. “And, he loves it,” said Shannon.

There were nine riders, including Shannon’s twin on the Loveland Bike Trail Sunday and had already gone 18 miles. With dusk approaching, they were not yet calling it a day, and why would they? It wasn’t dark enough for all of their twinkling LEDs to truly sparkle and bedazzle!