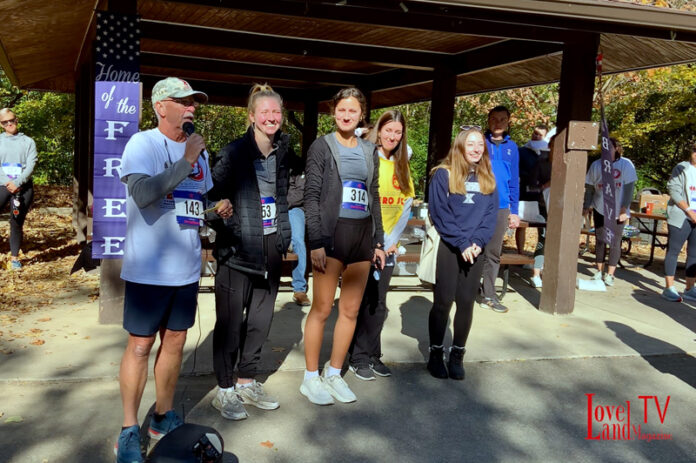 Loveland, Ohio – On Saturday, October 15 in Historic Downtown the 13th running of the Capt Seth Mitchel Hero 5K was held in Nisbet Park and along the Loveland Bike Trail and Little Miami River.

The annual walk and run are to honor a local and national veteran hero who grew up here in Loveland.

Seth Mitchell, a Captain and pilot in the United States Marine Corps and a 1997 Loveland High School graduate, was killed in action in Afghanistan in October 2009 in a mission he volunteered for. Mitchell contributed greatly to the Loveland community in his youth… he served as a leader and role model on the varsity football team, was voted to be Class President his senior year, and was named “Mr. Personality” by his peers.  He was well loved here. After graduating, he took that same sense of service and loyalty into all that he did: as a son, a brother, a friend, and a leader in the Marines.

In other words, Seth was a hero for all.

A group of Seth Mitchell’s high school classmates and friends, who miss their friend and want to keep his memory alive organize the races. The result has been a very sustaining scholarship memorial fund.

After the race, David Miller said, “I didn’t meet Connie and Steve Mitchell until after their son’s death, and my favorite part of attending this race each year is to renew a friendship that has developed. They mostly keep the grief that of course is always there just under the surface, and come each year helping the rest of us heal. They are inspiring people and I know where Seth got his moral code, discipline, and sense of service to others”

In the LOVELAND MAGAZINE TV video, you can hear from two of the organizers, Seth’s father, and two of the most recent graduates who received scholarships.

Eric Schroeder was the top male finisher with a time of 19:37. Kyle Kehling finished in second place at 20:17 and Greg Carpinello finished in 20:39.

Because of your generosity, the scholarship team provided 3 additional applicants with $500.00 each as gifts toward their next step in life.