“Our home is going to stay here, but we don’t know about the future of our business. We feel that at this time our business is being threatened.”

Loveland, Ohio – Mark Bersani said he and his wife Robyn are very excited about all the activity in the Historic Downtown Business District where their Loveland Canoe and Kayak is located and feel that they were visionaries to see the boom coming. The business is at 174 Karl Brown Way on bank of the Little Miami, the State and National Scenic River that runs through the heart of Loveland. He said they were very much a part of Loveland’s renaissance, by investing their life fortune in what city officials described 12-years ago as a blighted property in disrepair.

Mark and Robyn took to the podium at last weeks’s council meeting. Mark reminded council that in almost every piece of publicity about Loveland, the recreational aspect, if not their business specifically, is mentioned. However, he said they do not know how much longer they can stay in business. 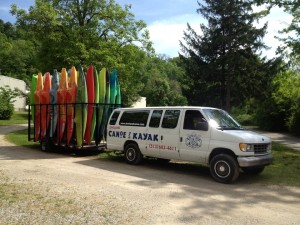 When the Bersanis purchased the business and property from the former owner they mortgaged their home, and leveraged investments to put “the whole deal together.” The City wanted some of the property and Bersani said that when he sold City Hall some of it he was told it would be used for “unstructured parking” and they would be able to use it to support their business. So, Mark said, “In good faith, they sold some of their land to the City.”

Mark listed a long array of community projects they have been involved in, including loaning the use of their property for a community recycling project for three years at no charge. This summer they installed an access ramp for use by the Loveland/Symmes Fire Department so they can save time launching their boats into the Little Miami for rescue emergencies.

Bersani said they had 17,000 patrons last year that also shopped in other downtown businesses, especially the local eateries. “We have people come from as far away as West Virginia to buy kayaks from our exclusive dealership. We’re like a magnet and an economic engine for Loveland,” he said.

City Hall is now developing a paved parking lot on the property the Bersanis sold to the City and at the former McCoy Carry Out.

Now, Bersani has been ordered to demolish or move his large storage barn and he said the public parking lot plan will not leave him with enough room to safely and efficiently load passengers on busses or canoes and kayaks on trailers.

“Our home is going to stay here, but we don’t know about the future of our business,” Bersani said. “At this time we don’t have an agreement in place that provides us with enough land to safely and effectively operate our business next year We feel that at this time our business is being threatened.”

On July 8 the Bersanis received a “not a very friendly letter” from the city engineer saying their large storage barn must be removed by the end of August or the city contractor would demolish it and send them a bill. If the Bransanis moved the barn to their property it would have to sit right on the bank of the river and comply with expensive “floodplain management standards.” To move it to the other side of his property where it would not be in the flood path, would require him to move it through the downtown streets, because it would not fit under the railroad overpass that divides his land. 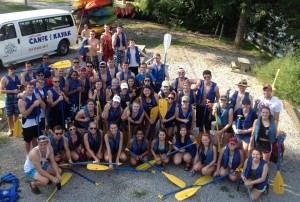 lost this season because of rain and high river levels. He also mentioned complete road closures during sunny, warm days due to construction of the Loveland Station Apartments. “We cannot afford to lose any more business this year,” he said. He also has a contract to take 300 Cincinnati School District children down the river in September and said he does not know if he will be able to do that if construction on the parking lot begins as scheduled.

Mark has asked the City to compromise and sell him a slice of property, which has been described by City Manager Dave Kennedy as “the road to no-where.” It is Anshultz Avenue, and essentially an abandoned piece of roadway next to his home and business. The roadway goes nowhere, but used for decades as the driveway into the canoe and kayak business. Even though it will not be used for the proposed parking lot, City Hall has rebuffed his offer.

[quote_right]On July 8 the Bersanis received a “not a very friendly letter” from the city engineer[/quote_right]Mark also said under the current plan for the parking lot they do not have a place to park their trailers and have them readily accessible. In return for what he needs, he said he will continue as he always has done, to make his property available for large community events such as the annual arts show and Christmas in Loveland.

Councilman Rob Weisgerber said he hoped, “Working with Mr. Kennedy, we would have found a solution by now recognizing the dates that are upon us.”  He asked the City Manager if he thought there was a workable solution or if things were at a standstill. “I’m looking at the dates, the maps, and the project – and  I just don’t have a very warm feeling that we have a path to success to make this a win-win.” Weisgerber pushed Kennedy to see if any of the dates for construction and demolition were flexible.

Kennedy said he would discuss the project with the city attorney and then sit down with Bersani the following week. Weisgerber was concerned that all of this had to be accomplished within a week. He asked, “Do we have time to make all of this workable?”

Kennedy said he wanted to award a contract to a contractor and have the paving done before the asphalt plants closed for the winter. He said he would have a proposal for council at the next meeting on August 25.