Loveland, Ohio – In a statement to the Loveland Community Heartbeat PAC today, Sherry Poland, the Director of the Hamilton County Board of Elections said, “On August 4, 2017, the Hamilton County Board of Elections received a petition for the recall election of Mark J. Fitzgerald, and an election of a successor. We have completed the review of the petitions and determined the petitions to be sufficient.”

Fitzgerald is the Mayor of Loveland and has two years remaining of his elected term of four years as a council member.

Poland said that if Fitzgerald does not resign within five days, an election will be held at the next general election on November 7. She also informed the community group that attorney Doug Holthus, on behalf of Mark J. Fitzgerald, has requested a protest hearing on the validity of the petitions and that the board has scheduled a Special Meeting on Friday, August 11th at 8:30 AM to hold a hearing.

Resident Neal Oury has collected signatures to run in the recall election against Fitzgerald, however, has not filed those petitions with the Board of Elections. He did, however, file a petition last week to seek one of the four-year-term open seats on council this fall. He told Loveland Magazine that if the recall petitions are certified, he will withdraw that petition and then file the signatures supporting his candidacy for the direct head-to-head vote against the Mayor. 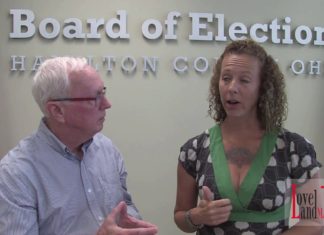