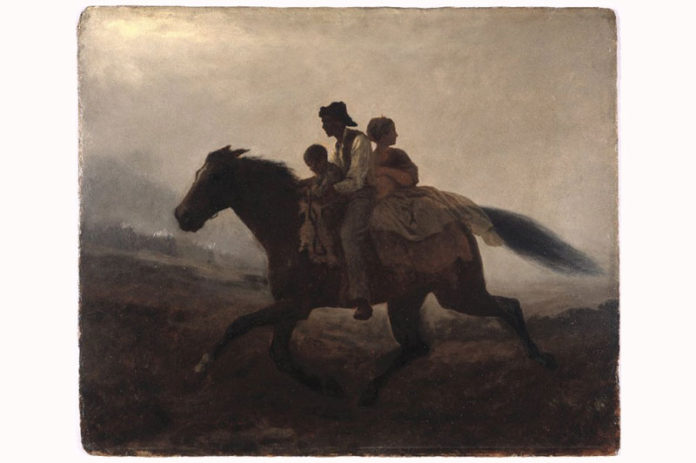 The Fugitive Slaves, oil on paperboard, circa 1862, Brooklyn Museum

The following is an excerpt from Chapter Seven of The Search for the Underground Railroad in South-Central Ohio by Tom Calarco, scheduled for publication in late October by History Press. It is being published with permission from History Press.

Tom Calarco is a resident of Historic Downtown Loveland, Ohio. 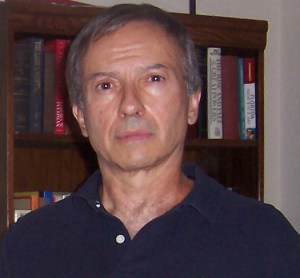 Part one of Two

Along the banks of the Little Miami River in the hilly countryside north of Cincinnati, stands an old stone house, a relic of slower days, when there was lots of land and few people. It is not lived in much these days, but a big family of Quakers lived there for many years. Their forefather, Benjamin Butterworth was a six-foot six inch pioneer, a giant of a man who was said to have weighed 300 pounds. His roots in America dated back before the 1700s. Born in Virginia, he fought in the Revolution and was entitled to purchase a grant of land in the Northwest Territory, in the Virginia Military District, of which much of Ohio was part. This land and his inheritance provided him with substantial wealth. He was like many future Ohioans who would settle the new state: a slaveholder who freed his slaves and took them along to where there was no slavery.

On September 15, 1812, he set out with his family and some former slaves in two covered wagons to cross the old green Appalachian mountains of
what is now West Virginia. It was a trek of more than 300 miles up mountains more than 4,000 feet high through scenic passageways like those that had inspired trailblazers like Daniel Boone a generation earlier; there was only one road through this wilderness, the Midland Trail which ran along the Kanawha River and today is Route 60. Benjamin, 46; his wife Rachel, 47; Moorman, 19; Benjamin Jr, 18; Samuel, 14; Rachel, 12; William, 10; and Henry Thomas (called by his middle name), 3, made the journey in 25 days. One can only imagine the sunsets blazing their fire in that pristine wilderness of future promises. In the years ahead their lives would soon be afire with the cause of abolition

When Butterworth arrived, he found that his 1500-acre property needed a lot of work to make it suitable for farming. Though it had the advantage of a natural springs and the Little Miami River, it needed clearing and was hilly and full of gullies. It would take time to make it livable. Instead, he took the family to nearby Waynesville where one of his older daughters, Polly already was living with her husband Zachariah Johnson. Within a week he purchased land along nearby Caesar’s Creek where they moved. Busy with his farming and building a mill, he ignored his other property for the next three years.

In 1815, Moorman visited it and found a squatter who had built a cabin and planted crops on five acres he had cleared. He bought the cabin and the crops, and moved in. Three months later his older sister Milly and her husband, John Dyer, emigrated from Virginia and they moved in with him. They built a two-story log cabin, and a year later, Benjamin and family joined them. By 1820, the old stone house overlooked the fields as it does today along the Little Miami Bike Trail. In future years, the Butterworth farm grew prosperous through the sale of sweet potatoes, chickens and their eggs, and the construction of the Little Miami Railroad that ran through their property, connecting south to Cincinnati by 1843 and north to Springfield by 1846.

Being Quakers, they were stirred by the movement for immediate emancipation of the slaves that already had many supporters in this section of Ohio.

For a time, a least up until 1850 and the passage of the Fugitive Slave Law, their most important business was the UGRR. Being Quakers, they were stirred by the movement for immediate emancipation of the slaves that already had many supporters in this section of Ohio. Slaves had begun running away more than ever as more in the North joined the effort to assist them. The Little Miami River was a natural gateway. When they exactly became involved in aiding them is not known but probably no later than 1830-1831 when their sons, William and Thomas, married into the Wales and Linton families, Quaker abolitionists who may already have been part of the UGRR.

The Little Miami River was a natural gateway.

Thomas’s wife Nancy was a Wales and her sister Jane married Valentine Nicholson. It was a double wedding. William married Elizabeth Linton. So, it became an all-in-the-family UGRR operation. Thomas recalled those days shortly before his death in a letter to Wilbur Siebert:

We [once] had two women, one man and some children on hand and had them concealed for some time and it was becoming unsafe to keep them longer . . . I had two good horses and a good wagon with high sides and a good set of bows and cloth. I put the bows on and then stretched the cloth on and tied it thoroughly down. . . . . After thus being all fixed I stored in a lot of hay for the poor creatures to lie on. Then after leaving all the children [the fugitives’ children] for fear of their crying and betraying us, I put in two carts for my daughter Mary and I to sit on.

After thus being all fixed I stored in a lot of hay for the poor creatures to lie on.

By this time we had heard that a pro-slavery boy by the name of Andrew Davis had somehow got a knowledge of the whole thing and had, perhaps for a sum of money, made it known to two persons who would do anything they could to catch the flying slaves. The names of these two persons [were] David Coddington and James Foster. We had heard of our betrayal; I prepared for it; the river was high. My destination was to take them to an uncle of my wife’s by the name of Turner Welch residing at Harveysburg . . . . The bridge here at Foster’s must be crossed and was a toll bridge. Joseph Whitney took the toll at the west and James Foster kept a store at the east end (just before they came to the bridge). We had our Quaker school teacher, Robert Way, to go with us to see if we should run the gauntlet . . . just as we expected out came the two men [Coddington and Foster].

Foster called out to him . . . Got any chickens, got any eggs, got any butter?

Butterworth shouted back as he passed by, “I am not going to market I am after fruit trees,” and handed Whitney the toll with stopping.

He heard Coddington say to Foster, “I’ll be damned if there ain’t niggers in that wagon.”

Butterworth had thought they would follow him and kept looking back but they made it safely to his wife’s Uncle on the north side of Caesar’s Creek. He did not consider it safe to keep them that night, so he sent them over to Harveysburg up on one of the many hills in that area, and Butterworth returned home to see about the fugitives’ children. He gave the task to Robert Carroll, who lived only a mile away with whom he had a regular arrangement regarding the transport of fugitives.

I had a small one or two-horse wagon. I had a neighbor a mile from me who was as strong an anti-slavery man as myself. As far as worldly goods were concerned he had nothing, was rich enough to have a wife and children to help him be poor. He feared no risks in helping fugitive slaves . . . I told him that when fugitives were on hand that he knew of, to come and get this wagon and one or two horses, as the case would require, and take them, and I would have no questions, and he should ask me none and go in the night, and go to such underground station as we know best, which was at or near Harveysburg . . . . This man Carroll took those children up there where they no doubt found their mothers.

Next Time in Part 2: Further Recollections of Butterworth Station