Project will be competed with another 25-day closure in Spring

Loveland, Ohio – The core of Loveland has been grid-locked because County engineers miscalculated the effect of, and failed to communicate with City officials about, a construction project in Branch Hill.

Jeremy Evans, the Clermont County traffic engineer for the Branch Hill-Guinea Road construction told Loveland Magazine Monday that the contractor will work during the next 4-weeks to complete the replacement and extension of the underground storm drainage system. He said, “The construction of this project will require a total of approximately 60-days of road closure.”

The contractor began replacing the 48” storm water system, starting from the bottom of the hill working uphill toward Branch Hill-Miamiville. They utilized the first closure to replace the storm pipe across the roadway on the downhill side of the Branch Hill-Loveland intersection. Evans said that as of last week, the plan was to temporarily connect that section of new storm pipe to the old, after crossing the road, and then return in the spring to complete the project. Evans said, “However, after exposing the existing storm pipe on the uphill side of the intersection we found that its condition warranted more immediate action.”

In announcing the change of plans last week, Patrick Manger, the Clermont County Engineer said, “…it is impractical to construct a temporary highway/culvert and that a temporary detour is required.”

Loveland City Manager, Dave Kennedy assigned police officers at traffic signals in downtown Loveland November 17, after complaints from downtown business interests. Kennedy said last Friday in an email exchange with Loveland Business owner, Tim Canada, “The county has agreed to assist the city financially with the added police coverage being utilized to flow traffic through downtown.” (Tim Canada: “What are you going to do about the poor traffic issues in Old Loveland?”)

Kennedy also said last Friday in that email exchange with Canada, “I have a call into Pat Manger, Clermont County Engineer regarding the impact of these closures on neighboring communities and whether the City could be a part of the planning stages prior to the closure being conducted.”

Loveland Magazine asked both Manger and Evans if the City and the Loveland School District had been given the opportunity to have input on the road closing last week. Evans told Loveland Magazine in an email Monday morning, “We discussed this project and the necessary road closures with the Loveland City School Administration and Transportation Department as well as the City of Loveland well before construction began and have maintained close communication with them throughout the project.”

City Manager, Kennedy disputes they were consulted. He said he confirmed with Cindy Klopfenstein, the City Engineer that they were not consulted regarding the closure, or the detour route. Kennedy said it was due to the fact that the county detour plan had traffic going to I-275 and the County did not feel that it would impact the city the way it did. “We were originally planning on a one week closure and we were notified by the County Engineer last week via a phone call and a press release that they were extending the project for another four weeks due to complications.”

Kennedy took his share of the blame for the traffic mess the first closure caused for Loveland motorists. He said, “I admit that I did not properly prepare for Monday and that was my mistake. I think the Police Department has done a good job handling the situation from that point forward. We will continue this throughout the balance of the project.”

“The County Engineer did notify us that there will be another closure in the spring although they don’t have the dates yet or for how long. They stated they will keep us notified as the project progresses,” said Kennedy. Both the City Manager and Chad Hilliker, the Loveland School Superintendent said they understand the next closure will happen once school is out for summer break.

Hilliker, said, “We have appreciated the city’s efforts in making travel easier through the downtown during our operations hours.”

Kennedy said he spoke with Chamber of Commerce President, CeeCee Collins and she confirmed that due to the traffic issues, West Loveland in downtown will stay open during Christmas in Loveland on December 12. Kennedy also said that the Chamber will be providing a shuttle from the Shoppers Haven parking lot into downtown. “We are of course asking everyone to use caution and we will have Police there to assist with traffic and safety,” said Kennedy.

The detour is approximately 4.81 miles.

Click to see a larger view of the current detour map. 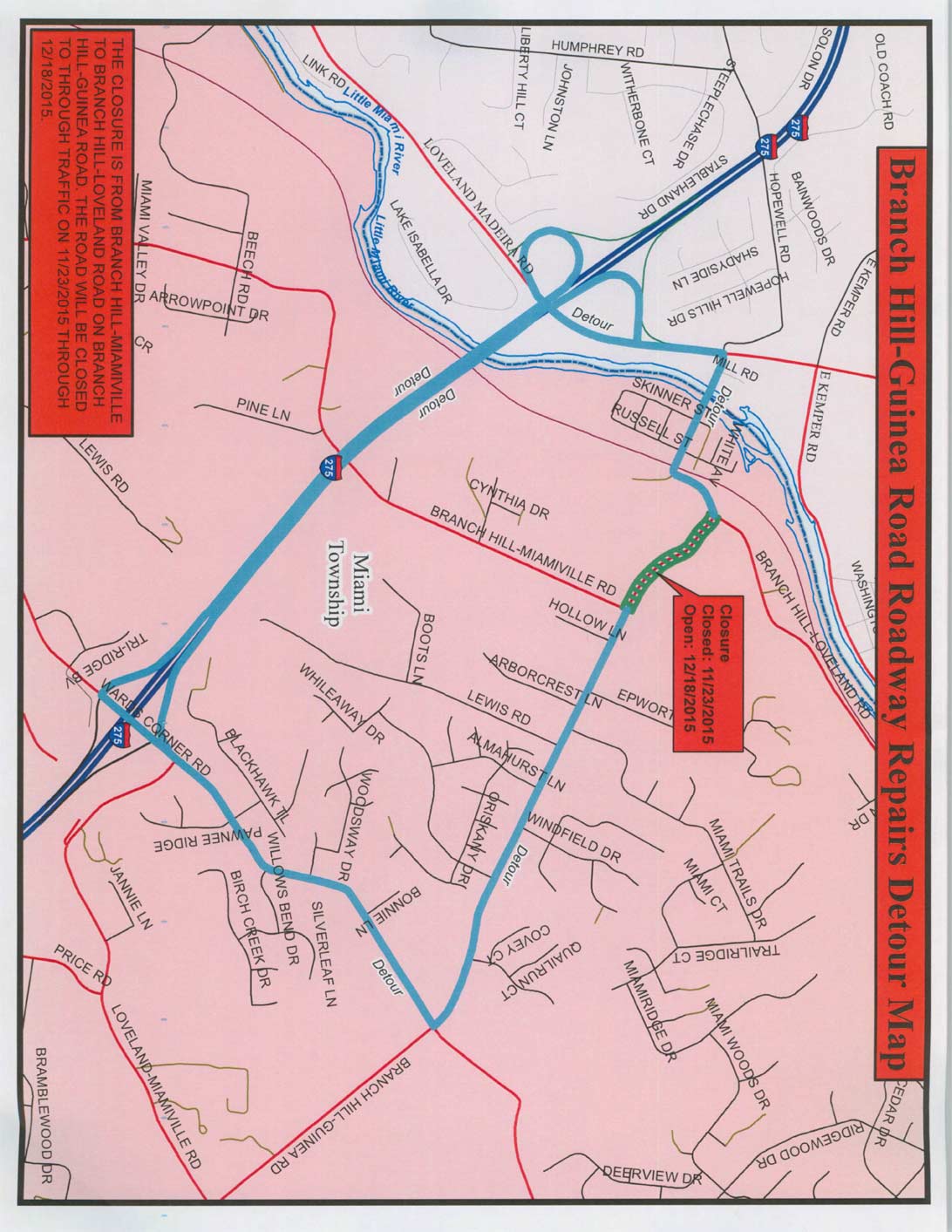 Click to see a larger view of map of a short-cut into Loveland from Branch Hill provided by Loveland Magazine. 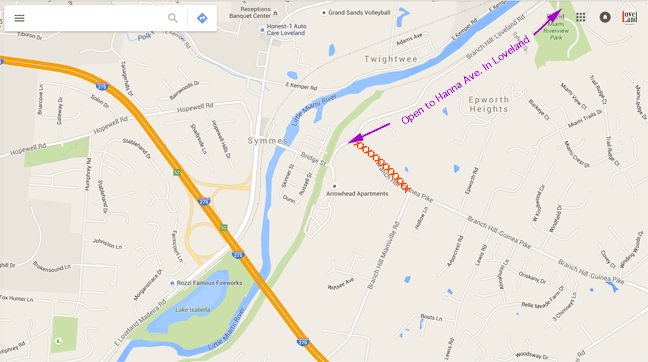