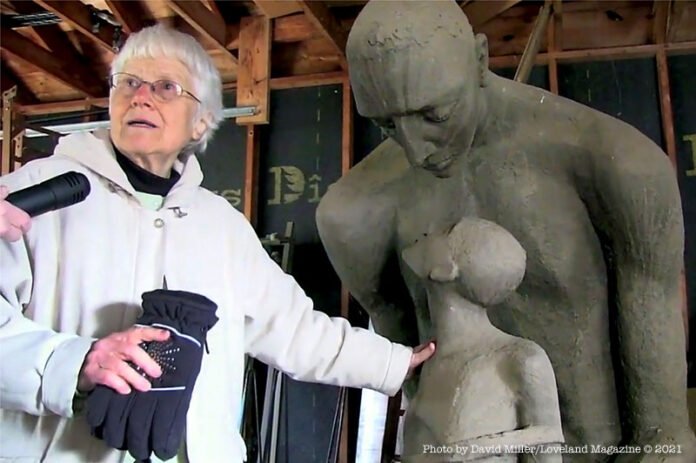 The statue that wasn’t to be seen in Loveland

Loveland, Ohio – In December of 2011, I hadn’t seen the statute of Abraham and Isaac by Trina Paulus since it was first brought back to Grailville, carefully on the bed of a pickup truck. I was invited to be there when the statute was returned to Grailville for safekeeping. So jumped at the chance to be there when she saw it again for the first time in many years. Seeing it for the first time, placed temporarily under a gazebo behind the House of Joy, it was in my opinion the most significant piece of art I had ever seen in Loveland, and I believe, still so.

We met Trina with our video camera for an interview by Alana Johnson, an artist in her own right, at Grailville and went in Alana’s car from the House of Joy to another house on the Grailville property, one across the road – to see if we could find it. This video was shot on December 9, 2011.

It is wretched, distressing, tragic – and beautiful.

At the time of my first seeing Abraham and Isaac, I begged the Grailville folks to let me help them find a place where the father and son could be publicly displayed, however, they determined it too controversial to do so. I think if I remember correctly, it was only “appropriate for mature audiences” and no one in Loveland was mature enough to see the old testament story depicted so threateningly and savagely real.

Relistening to Paulus talk about her Abraham and Isaac and the essence of what she was conveying through the work of her sculpting hands and spiritual heart, is still is heartbreaking that the human soul was meant to struggle to understand such a contemptible subject.

They were right of course because seeing the statute naked, absent Trina Paulus telling the story, is utterly perilous.

At the time, I wrote, “The Abraham and Isaac statue is a poignant and significant piece of art. It is wretched, distressing, tragic – and beautiful. It has been stored temporarily for several years just outside of Loveland. Loveland Magazine Reporter Alana Johnson went with Paulus to an unlit garage at the Grailville Conference and Retreat Center Wednesday morning to see it. Paulus hadn’t seen her statue for several years.”

“Johnson, kicking aside weeds at the door, struggling to operate the key, brushing away cobwebs, and in the darkness, her eyes needed a few seconds to dilate… ‘Aah. Oh. Ooh,” each second, as more is revealed. “That’s incredible. It’s incredible.”

During Johnson’s interview, Paulus said, “Over here you will see a hand with the knife in it… and over here… you’ll see the hand with his son. I’ve done a lot of thinking about this over the years – the great Christian mystery of the crucifixion and the resurrection and… The very unpleasant thing is that God can ask everything of us sometimes… The whole mystery of why we die, and why we die so miserably sometimes… In our time it’s a very unpopular story.“

Trina Paulus came to Grailville in 1949 as a teenager. She said it was a magnificent change for her even though the living circumstances then were extremely simple and sometimes primitive. “The cultural experience was a high art form.” She now lives in Montclair, New Jersey. Paulus started sculpting at the age of eight in Cleveland Heights, Ohio with mud from the creek in her backyard. She won national awards as a high schooler. She is now 90 years old and doing well.

View Loveland Magazine’s other stories in our Graville Archive: