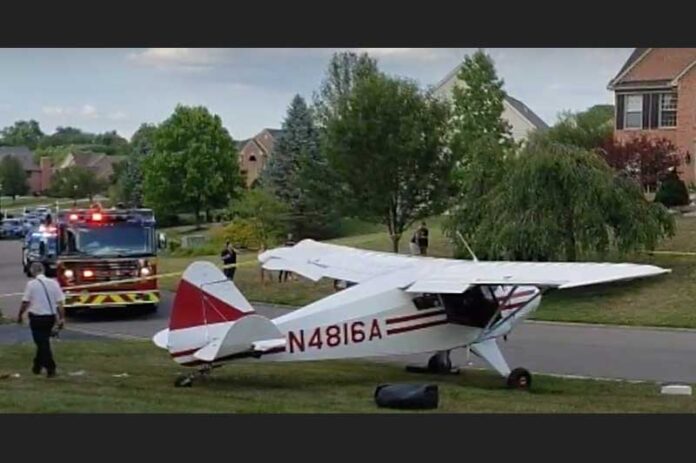 Miami Township, Ohio – Phillip Sullivan made an emergency landing of his Piper airplane on Deerfield Drive in the Miami Trails subdivision while returning from Wadsworth, Ohio to his hometown of Louisville, Kentucky on July 18. He was on a Pilots-N-Paws flight and had delivered puppies to the northern Ohio town that is South of Cleveland.

The incident report was recently released by the National Transportation Safety Board (NTSB). Sullivan told Loveland Magazine on Wednesday, “The plane had unrepairable damage to the main fuselage so it’s being parted out.”

Sullivan was flying his single-engine, fixed-pitch, 150 horse-power, four-seater Piper model number PA 20/22 made in 1965. There were 2,865 hours on the engine at the time of the crash (5:30 PM) and 1,600 hours since it was last overhauled. The last time of an annual inspection was March 4, 2020. The plane had an Emergency Locator installed and it was operating at the time of the crash, however, the report says it did not aid in landing the aircraft. There also was an Automatic Dependent Surveillance-Broadcast System aboard as well as a hand-held GPS device.

Twenty-one-year-old Sullivan of Louisville owned the craft and was the pilot. There were no injuries. Sullivan has a “Private” pilot certificate. He had a 3-point restraint system onboard, however was only using a lap-belt. There were no inflatable restraints on the aircraft. The last time Sullivan had a “flight review” was March 30, 2019. He has recorded a total of 528 flight hours and 168 hours on the plane that crashed. He also has a helicopter rating and has flown a rotorcraft for 71 hours.

“The problem stemmed from my fuel gauge,” said Sullivan. “Both fuel gauges evidently are empty when they say 1/4th of a tank, something the previous owner didn’t disclose to me. One-fourth of a tank is about 9 gallons in a Piper model number PA 20/22, leading me to believe I had close to 18 gallons on board when the engine quit.”

Sullivan left Wadsworth, Ohio at 2:15 PM and the destination was Cincinnati Municipal Airport-Lunken Field. The sky was listed on the report as “Clear” and VMC, which refers to conditions that permit a pilot to maintain visual reference with a horizon and provide enough visual references by which he or she can navigate. The report says that visibility was 10 miles.

Sullivan was at an altitude of 2300 feet MSL (mean sea level) and 10 miles out from Lunken Field and was cleared to land when the engine started to lose power.

The left-wing was destroyed. The right-wing had a small tear in the fabric. The bottom right cowling was “smashed”. The fuselage above the right seat was bent. The right horizontal stabilizer and tailwheel were bent. The total damage is listed as “substantial” in the report. The aircraft hit three mailboxes, one light pole, and damaged one tree.

The mechanic that inspected the engine for NTSB said in his report that the tanks were “sumped” showing no contaminates in the fuel. He said that no fuel remained in the left tank, however, he found 5.5 gallons in the right tank. He drained the tank, put the fuel back, in and had no difficulty starting the engine.

In the narrative section of the report, Sullivan told investigators that the flight was uneventful until the engine quit close to Lunken Field. He said that the terrain was heavily residential and that he attempted to land in a golf course but large hills forced him to divert to a secondary landing area – the subdivision road. “The road was slopped downward and a 30′ obstacle (trees) at the beginning of the road.” He believed the error occurred when he used “1/4 on the fuel gauge” to fuel up the aircraft. “I incorrectly assumed 1/4 meant 1/4 of the way full, instead as I learned the hard way, 1/4 on the fuel gauge means empty, so when I added 15 gallons of fuel at the start of my flight, I only had 15-18 gallons onboard instead of the 24 gallons.”

The narrative continued in the Operator/Owner section with Sullivan concluding that the cause of the engine failure was fuel exhaustion and he can avoid the problem in the future by creating a fuel dipstick. “Fuel gauges cannot be trusted,” he said.

Sullivan told Loveland Magazine that he believes due to the incident there will be an airworthiness directive released on the specific fuel gauge used in his airplane.

Sullivan said that because of the unrepairable damage to the main fuselage of his plane, “It’s being parted out. Due to the high cost of aviation, I’m out of aviation for a while. Volunteering is still a priority for me and I’ve found other ways to volunteer my time towards charity.”

“The best way for present and future pilots to prevent this is to create and use a dipstick. It’s not something taught in flight school and very well should be taught,” said Sullivan. He described the dipstick he should have been using:

“A dipstick is a wooden stick, usually larger than 2 feet. With intervals written on it. E.t. 4gal, 8gal, 12gal, 16gal, 20gal. Using this before each flight tells you exactly how much fuel is in your tank and you don’t rely on fuel gauges.”

Loveland Magazine has reached out to the NTSB to find out what will be the next steps in their investigation and when a final report will be issued and will update this story when more information becomes available.

Here is the MECHANIC REPORT: