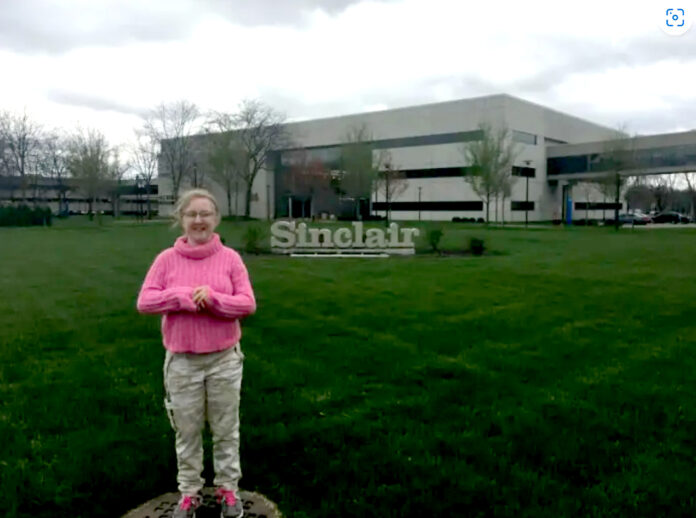 by Cassie Mattia and the Butler County Board of Developmental Disabilities

Everyone experiences challenges in their lives whether it’s having a not-so-great work week, overcoming an illness, or getting into an argument with someone you care about. In the grand scheme of things, those challenges are often ones you can quickly overcome and grow from! Some obstacles in life can be so challenging that when one overcomes them it is not only inspirational to see but also serves as a beautiful example for those experiencing the same obstacles. Meet Kathryn (Kat) Feldmann, a 21-year-old who has not only never backed down from a challenge but has also been a source of motivation for others in the developmental disability community to pursue their dreams.

Kat, who lives with her mom, Kristen, her dad, Kurt, and her brother, Konrad in Liberty Township has overcome a lot of medical challenges in her life. As a baby, Kat was diagnosed with an Atrial Septal Defect that was eventually corrected through surgery. Kat was also diagnosed with autism, Pierre Robin Sequence, anxiety, Craniofacial Anomalies, and a speech delay. Though Kat deals with challenges daily due to her disabilities, she has successfully managed to not only exceed her goals, but also receive many awards/honors along the way for her outstanding achievements.

Kat, as a very young girl, loved being involved in the community and supporting organizations that she truly believed in.

“Throughout her school age years, she participated in Butler County 4H doing mostly food and nutrition projects and even competed at the state fair twice,” Kat’s mother Kristen said. “Kat was also involved in Girl Scouts since first grade and earned the Girl Scout Gold award.  For this, she earned a multiyear grant from Katie’s Krops and grew a garden from which she donated her entire harvest to a local food pantry. She also identified and printed recipes to donate alongside the produce so that the recipients would have a better idea of how to cook it.”

Kat’s determination and dedication to the environment, her community, and cooking delicious, healthy, fresh food earned her multiple 4H awards and a trip to Washington DC where she served as the “Citizens Focus” Club’s Treasurer. Little did Kat realize she was becoming one of the biggest local advocates for those with developmental disabilities!

As time went on, Kat began to really enjoy researching things that interested her, often watching YouTube videos to learn as much as she could about topics that she was passionate about. This led to Kat diving into many hobbies such as collecting American Girl Dolls, reading books, cooking, music, dancing, spending time with her Siamese cats, and art.

Kat successfully graduated from Lakota East and shortly after became a part of Butler Tech’s Project Life, a comprehensive, multi-year transition program where students develop, practice, and strengthen skills that increase adult independence and successful integrated employment in the community, and Butler Tech’s Project Search, a school-to-work program for students with disabilities who are serious about working hard and getting a job.

“Kat completed both Project Life and Project Search in May of 2022. For Project Search she completed rotations in the emergency department and the lab at West Chester Hospital,” Kristen explained. “She is now working with Opportunities for Ohioans with Disabilities (OOD) to secure employment in the future.”

Once Kat finished Project Search she realized she had an interest in Hospitality which led her to enrolling in the Tartan TOPS program at Sinclair College, an educational/career pathway program for part-time students who have an intellectual disability.

“On top of all the amazing things Kat is doing, she recently began a vocational habilitation program at InsideOut Studio where she creates various art pieces,” Teresa said. “She loves art and is VERY talented. She has a few pieces for sale on the InsideOut Studio website that show how gifted she is at art!”

Kat enjoys all aspects of art and is currently working with fiber and crocheting knits at InsideOut Studio. Kat said she hopes to sell some of her creations through the online store.

“Kat is also involved in SpeakUp and was recently matched with a buddy through Best Buddies and looks forward to fun times ahead with her new friend,” Kristen said. SpeakUp is a BCBDD self-advocacy group and Best Buddies is a non-profit organization that offers one-on-one friendship and leadership development programs for individuals with intellectual and developmental disabilities.

Kat says her main hope and dream is to become as independent as possible and to live with roommates and friends for socialization. She says she would like to get a job that allows her to make a difference in the world and continue doing what she’s passionate about!

• She LOVES to cook and bake at home!
• She is always in charge of making the corn casserole each year for Thanksgiving.
• She loves cats and has three Siamese cats and also enjoys loving on her brother’s service dog.
• She has an eclectic taste in music and her favorites include Elvis, ABBA, 21 Pilots, and Blondie.
• She enjoys setting up tea and biscuit parties for guest and visitors at her house.
• She has 2 beautiful pieces of art for sale on InsideOut Studio’s website and is currently taking requests for those that would like a custom art piece made by her!

Join us in congratulating Kat Feldmann on all her accomplishments! We can’t wait to see what the future holds for Kat!

Columnist Cassie Mattia is a resident of Historic Downtown Loveland and the PR Coordinator at Butler County Board of DD. Cassie was awarded the Little Miami River Chamber Alliance 2021 Young Business Professional of the Year. She is co-owner, President, and Publisher of Loveland Magazine.