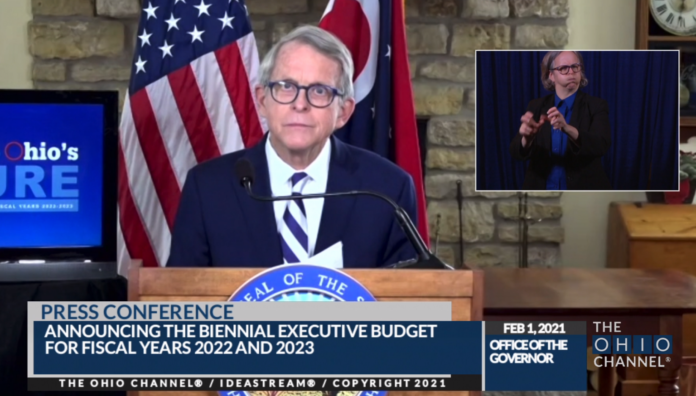 by By Tyler Buchanan and Ohio Capital Journal

Acknowledging this as being an “extremely challenging time in Ohio,” DeWine nevertheless offered an optimistic view of the coming two years and said 2021 in particular would be a year of recovery.

The governor emphasized the need for targeted investments toward Ohio businesses, communities and workers as the state continues to deal with a pandemic that has left thousands dead and more than a million seeking unemployment aid at some point in the past year.

“We see a bright future ahead,” said Kimberly Murnieks, the state’s chief budget officer, in helping to roll out the budget plan.

The proposal kicks off months of negotiating with the Ohio legislature, which is tasked with approving a state budget this summer.

Here are some main takeaways of how the budget affects everyday Ohioans and some details about the next steps in the budget process:

At the centerpiece of DeWine’s budget proposal is a new economic recovery plan referred to as the “Investing in Ohio Initiative.”

A total of $460 million in grants would go toward bars, restaurants, entertainment venues and other small businesses hit hard by the pandemic, DeWine said. Of this money, $20 million would be specially allocated for new businesses started since the beginning of 2020.

Another major component of the Investing in Ohio Initiative is $250 million for broadband expansion throughout the state of Ohio. This is an “incredibly important” priority, Husted said, noting that Ohioans without adequate internet access at home have fewer education, health care and telework opportunities.

This proposed spending is made available, DeWine said, due to money saved by the state government during the pandemic as well as increased federal spending in Ohio that has freed up additional money.

There is one other aspect of the Investing in Ohio Initiative plan.

This is a component of the governor’s proposed recovery plan that turned some heads.

DeWine hopes to see the state embark on a $50 million marketing campaign to promote the virtues of Ohio to the rest of America.

The idea, he said, is to convince residents and entrepreneurs living elsewhere to relocate to the Buckeye State.

“We want to position Ohio as the place to be,” DeWine said, saying the campaign should highlight the state’s cultures, cities, universities and workplace opportunities.

No new taxes, but some new fees

The governor and chief budget officer repeatedly made note of the effort to not propose any new taxes with this budget.

It does, however, call for increasing some fees that Ohio residents have to pay at the Bureau of Motor Vehicles. The budget proposes a $10 increase on motor vehicle registration fees and a $2 increase on title fees.

This would raise millions of dollars benefitting the Ohio State Highway Patrol, which Murnieks said is in need of additional funding to pay for its operations and security responsibilities. (The Patrol provides security at the Ohio Statehouse.)

He mentioned a particular need to invest in better data systems for health departments to process and report public health information.

The governor will talk in future detail about the proposed public health spending in his Tuesday pandemic press conference, Murnieks told reporters.

The budget proposes a notable increase in state Medicaid spending. Murnieks said this is due to a rise in the number of Ohioans relying on Medicaid during the ongoing health crisis and an expected decrease in federal funding.

Regarding education, DeWine did not include any changes with the K-12 funding formula in his budget proposal, noting that lawmakers are still debating the issue.

In sum, funding for Ohio schools would return to levels seen before the pandemic hit. (OCJ covered the education budget proposals in a separate article which you can read here.)

Throughout the pandemic, DeWine has said the state would not tap into its $2.7 billion “rainy day fund” unless it was absolutely necessary.

The state opted against doing so for all of 2020, even while instituting hundreds of millions of dollars in cuts to public education last May.

Likewise, the state evidently has no intention of using that money in 2021. DeWine did not propose any funds be used from the rainy day fund in his budget proposal.

Murnieks told reporters that it’s beneficial for Ohio to continue saving it for any future budget catastrophe. She said the state likely would have relied on this money had it not been for the funding assistance provided by the federal government.

The state legislature will now start reviewing the budget proposal.

The negotiating process begins in the two chambers’ Finance Committees. Eventually, the budget will come to a full vote in the Ohio House of Representatives and the Ohio Senate. Members from both chambers will then hash out any differences before a final budget bill heads to the governor’s desk for approval.

The budget must be approved by the start of the new fiscal year (July 1), though it’s not uncommon for negotiations to continue past that date with a temporary budget in place.

Tyler Buchanan
Tyler Buchanan is an award-winning journalist who has covered Ohio politics and government for the past decade. A Bellevue native and graduate of Bowling Green State University, he most recently spent 6 1/2 years as a reporter and editor of The Athens Messenger and Vinton-Jackson Courier newspapers. He is a member of the BG News Alumni Society Board and was a 2019 fellow in the Kiplinger Program in Public Affairs Journalism.